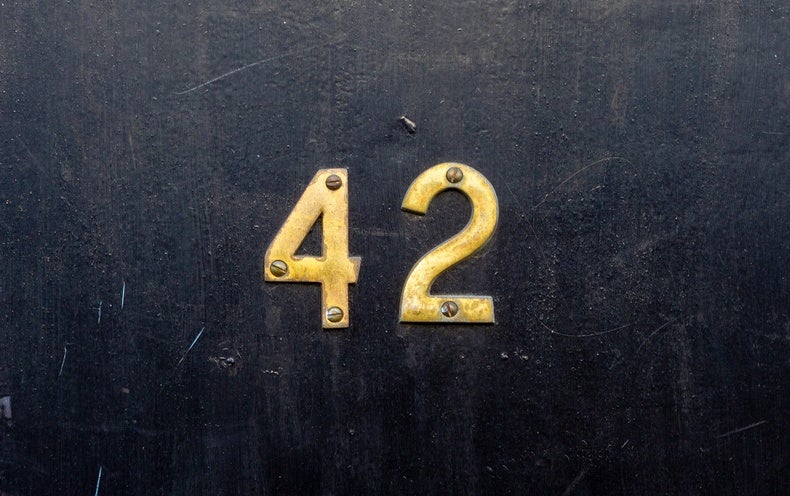 For Math Fans: A Hitchhiker’s Guide to the Number 42

Here is how a perfectly ordinary number captured the interest of sci-fi enthusiasts, geeks and mathematicians

have any of your guys heard of the movie called ""Number 23"" with Jim Carrey? It's been a while since I've seen it, but from what I remember, in the movie he was obsessed with the number for its mysteriousness or something.

Have to admit I missed that one. But then, Jim Carrey is hit-or-miss with me.

he's always a hit or miss. some of his stuff is good, some is bad. I have a few of his films within my 850+ movie file collection. LIAR LIAR being one of them. I thought he played a great family man in that film.

I enjoyed him in Bruce Almighty and The Mask but he was totally over the top in the Batman and Robin film. That latter case is really saying a lot because the whole "Batman and Robin" franchise was played strictly a la' camp until the Christian Bale versions showed up.
G

42 is not a particularly significant number mathematically.

However some numbers are very special, especially those that are integers and 42 just missed two them. 41, from Euler's prime generating polynomial, and 43, which is one of the eight Heegner numbers 1, 2, 3, 7, 11, 19, 43, 67, 163. The Fibonacci Numbers are better known but they are an infinite sequence. The Heegner Numbers are a small finite set which make them very special.

The first couple of Heegner Numbers are considered trivial. The last three participate in an interesting expression that includes three irrational expressions but whose results are incredibly close to being integers, especially with 163.

Code:
.
Yet the Natural Number raised to the square root of the product of any of these three numbers and pi is almost an integer, in the case of 163, to twelve decimal places.

The reasons for this are not mathematical accidents. They are fundamentally related to the Golden Ratio. This unique irrational number is x where

Days until the election
42

And of course we cannot forget that 42 was actually the answer to the previous question, not the answer to the meaning of life. See, the input and output queues had become desynchronized.
You must log in or register to reply here.

Is Donald Trump his own worst enemy?
2