We seem to continually go round and round in circles. We argue the Democrats this, the Republicans that. Politics seems to be one of the major dividing lines. We also have religion too, with Islam vs Christianity. Covid believers vs deniers. Mask wearers vs non-wearers.

Coming from a software engineers perspective, I would like to think that if you get a set of data, you generally come to the same conclusion. But that doesn't happen.

How is this so? What is actually going on inside our minds? Are these alternative realities all just figments of our imagination?

They occur, Jon, because our minds are not perfect digital processors. Yes, we have a sense of history, so we COULD detect a loop. But our neurons fire (ultimately) on analog triggers - the electrochemical potential that has an axon/neuron gap to bridge. Therefore we think more along the lines of chaos theory; more specifically, sensitive dependence on initial conditions (SDIC). We have phrases in the language that actually reflect the level of potentials. "I am THIS CLOSE to smacking you" or "I feel that I am over the edge with frustration." Each person forms an imperfect mental image of reality based on an imperfect data source. There are literally BILLIONS of words published on political subjects. Who can read them all? Who can understand them all? (I make no claims of understanding either.)

Each of us has a personally unique history. Perhaps I dozed off for a moment in class when someone explained angst or schadenfreude as mental concepts. Perhaps I was looking at a pretty classmate during a lecture on civil rights issues. Perhaps I was taking a nap during news coverage of some important event. Everyone is different in what they know, what they believe, what they remember. Therefore, in this world of imperfect data, we go 'round and 'round the mulberry bush because with each circuit thereof, our knowledge changes and therefore affects our next round of decisions. BUT the sad part is that, again being human, that extra modicum of information STILL isn't complete.
A

I thought schadenfreude was Yiddish because only my Jewish friends ever use the term. Turns out it is just German. Two of my best friends (Bridge, at least in this area, seems to attract Jews for some reason so I have proportionally more Jewish friends than population statistics would suggest) were both holocaust survivors and the wife of another friend survived the fire bombing of Dresden. The two holocaust survivors are gone now but the survivor of Dresden is beside herself. She was young during the Nazi era (born in 1935) but lived under the Communists since she was in East Germany when the war ended and she is convinced that we are doomed. In her opinion, the Democrats are actually evil and their current rants about cancelling conservatives prove it. My housecleaner is from Brazil and also is convinced we are doomed. She is especially bummed since this was the first election she got to vote in since she got her citizenship last year and it was stolen. She emigrated from Brazil to get away from the corruption of stolen elections. I guess she came to the wrong country

Pat, while I am known to drop an occasional Yiddish bon mot, in this case I knew what I was referencing. (How's THAT for a multi-lingual reference?) My favorite Yiddish phrase relates to their insults, which are SO subtly elegant. This transliteration allows for different letter values and typical Yiddish contractions and elisions. Here goes:

= "You should stick your head in the ground and grow like an onion. For you it would be an improvement."

The original phrase includes fractured German, "drerd" as Yiddish short-hand for Der Erd (the Earth or the soil), and "tsibbik" which is actually a Russian / Yiddish word for onion.

A practical definition of schadenfreude is "that feeling that you get when you see the guy who just flipped you off in traffic hit the front fender of a police cruiser."
A

While President Trumps approval index is -4 at the moment, it's interesting to see his total approval keeps ticking up. 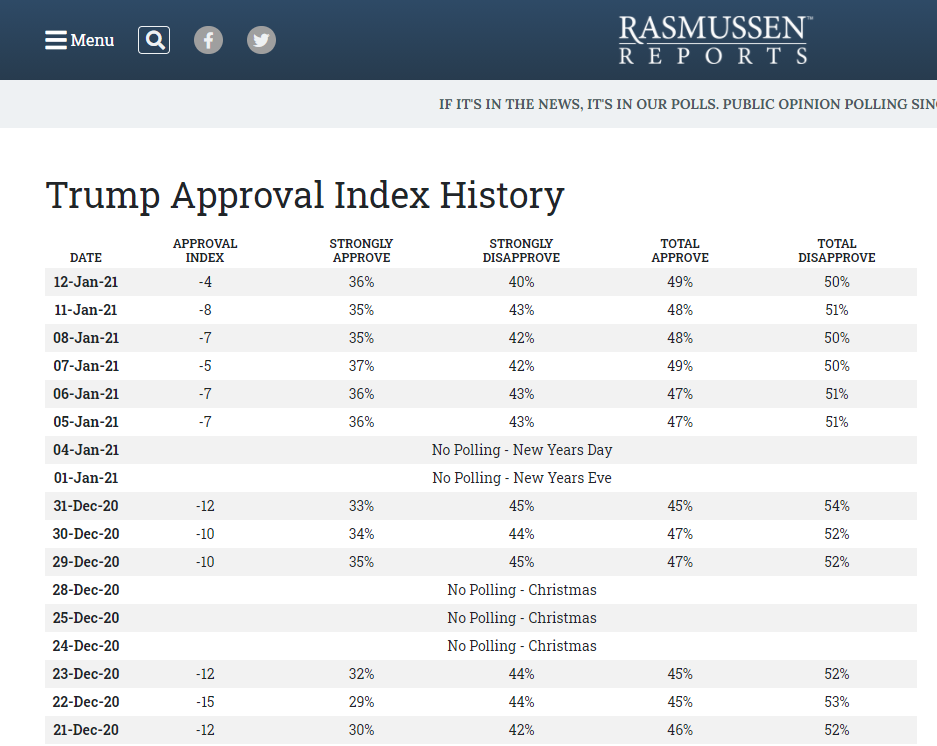 I posit a fairly simple explanation, Jon. Spirituality and/or religion. (They're one and the same to me, but I know some people are sensitive to the term Religion, hence I offer both).

And no one worry--you don't have to be the slightest bit either spiritual or religious to agree with me, or at least see the point I'll make.

I think it all comes down to that hypothetically, on a non-spiritual plane, you only use data. Nothing else matters. If it can't be quantified in a scientifically observable way, it doesn't matter.
Hypothetically, on a spiritual plane, you have a lot more than that. You believe in another dimension from whence we cannot necessarily gather data (or the data we gather isn't something everyone agrees on the measurement of), therefore, motives......methods......goals.....values......conclusions.....They will all be different between the two hypothetical persons.

Of course what Doc said is also true. Even if we all received the exact same information/data in exactly the same way, we'd process and interpret it differently. I was telling my family the other day how fascinated I was about how 2 human beings could interpret the capitol riots vs. the BLM riots in 2 exactly different ways. One person concludes "Gee, the capitol people got away with murder". The second person concludes "Gee, the BLM people got away with murder". And they both observed the same events.

However, I think even if we all got the same set of facts, presented in the exact same way, otherwordly beliefs change everything.
Two parents can be presented with the exact same fact: Do ____ and you will reap maximum benefit. But if one parent believes in God and the other parent doesn't, then "benefit" is going to be interpreted differently, some people are focusing only on "can"; others are factoring in "should".

Because not everyone is strictly utilitarian/hedonistic, we will never agree.
A

Trump can walk across the DMZ, but Biden can't have a inauguration rehearsal with 20,000 troops protecting him. 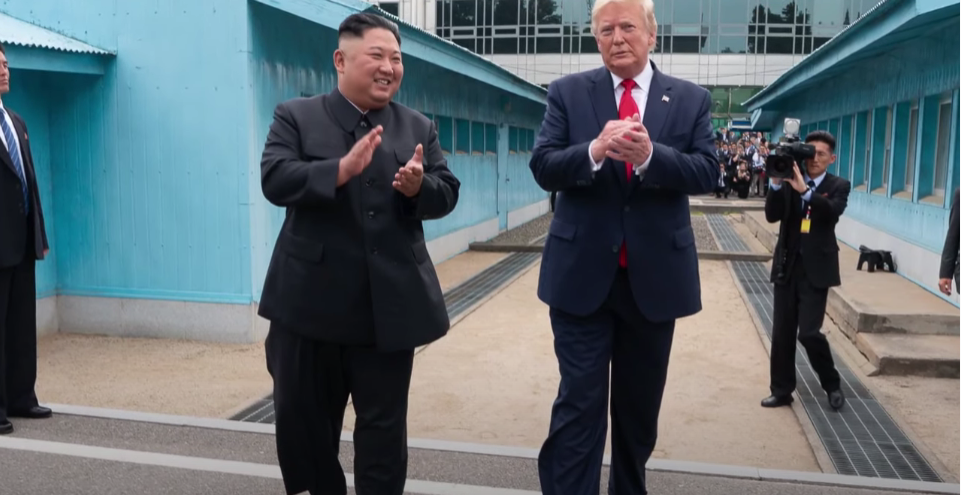 Vassago said:
Are alternative realities as false as alternative facts?
Click to expand...

The CCP chyrons are often wishful thinking rather than fact. The rest of the time, they tend toward opinions. Facts, what facts? The American people are too stupid to be able to interpret the facts themselves. WE have the job of doing it for them!
A

Stroking out in real-time 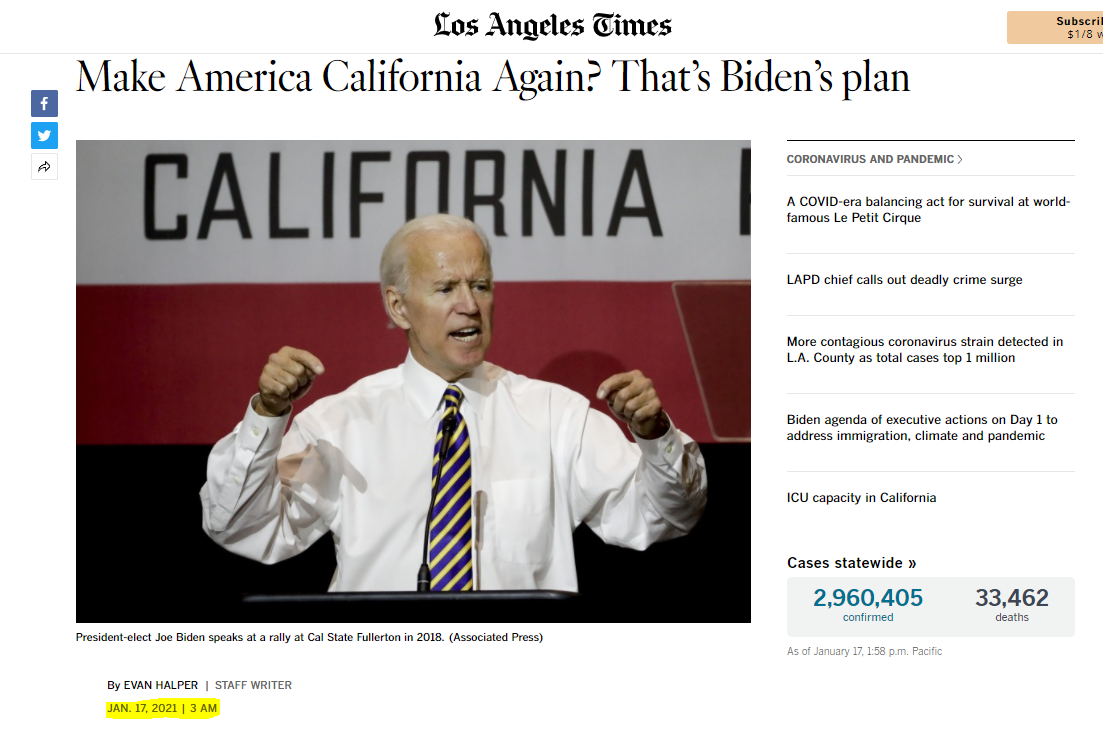 Californians have made California so bad that they're leaving it in droves. I think we need a border wall around California.
A

Trump must be getting a special discount with Rudy. Dude find a real lawyer, anyone but Rudy or Kraken lady.
You must log in or register to reply here.