Biden on Healing and Unity (1 Viewer)

Yet Biden got the most votes in American history.
Click to expand...

If you believe that, I have a bridge to sell you. The Dems are doing as much damage via executive order as they can, as quickly as they can, and they're doing it all over the country because they know at some point the jig will be up.

It was truly stupid to boast to the NY Times. I guess they think that they are invincible. 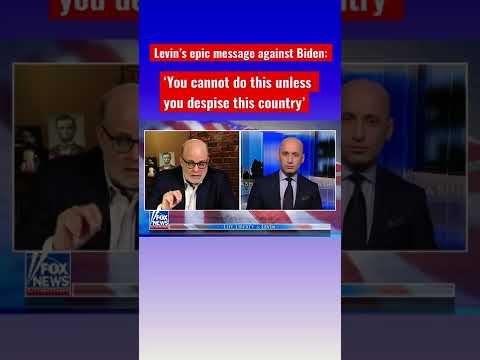 Mark Levin epic speech against Biden: This is tyranny #shorts

Mark Levin epic speech against Biden: This is tyranny #shorts

https://video.foxnews.com/v/6303511059001?playlist_id=930909787001#sp=show-clips An excellent video clip overview by Mark Levin within the background of illegal immigration. The job of the President, as the chief executive officer of the US, is to enforce the laws. The President does not have...
www.access-programmers.co.uk
P

When Trump was president, the left would get apoplectic if he attempted to enforce laws. Look what happened when he enforced the separation of children when there were no family quarters available. The de facto solution was to release the parent rather than incarcerate them when no family housing was available. But Biden actively IGNORING laws and refusing to enforce them is quite OK.

I'm not sure why we have laws that we have no intention of enforcing. Trump was trying to make a point. He was trying to get Congress to FIX the law by enforcing it. But they never understood what he was doing. He was just this evil orange man who hated immigrants and sadly, way too many Republicans bought into this.
You must log in or register to reply here.