I have used various techniques in the past few months to get around the ridiculous artificial intelligence systems that the big players (and even the small players) are using to mitigate the use of actual employees to answer basic-level questions. My questions are always on a much higher level than that and I know full well that the robots can't answer them, so I always do whatever I can to confuse the robots so they'll be forced to ask a human being to help out. I had to talk to credit card company HSBC today about an issue that was quite complex in nature, and I knew that the robot probably didn't have the answer, nor did I want to go through the endless menus it offers to try and see if it did, so this is what I did to make it contact a human....

<edit>
This method also works when calling into these companies. I used it when calling Discover Card's customer service, although in that instance I went to an extreme and said "what is my APR after 60 months?"

So what other Banks and Credit Cards do you use?

Just asking for a friend.

moke123 said:
So what other Banks and Credit Cards do you use?
Just asking for a friend.

Well based on last PM to me Moke, I would assume you're giving me grief here. Is that actually a legitimate question?

well if you remember this thread https://access-programmers.co.uk/forums/showthread.php?t=308214

Dont be surprised when you get a call from someone stating they're from HSBC.

moke123 said:
Dont be surprised when you get a call from someone stating they're from HSBC.
Click to expand...

I'm not sure this statement by you is relevant Moke. How could engaging in a legitimate online chat with an HSBC robot result in me getting another call from a scamming organization? Surely HSBC's website has the most up-to-date security!

if anyone is reading this, I just ran another test with American Express's robot when calling customer service. I said the following to it, when wanting to know when I am getting my new card in the mail:

how is my business card routed through the United State's postal service if it goes through more than one post office?
Click to expand...

and the answer I got back was:

I understand you want to know what your monthly balance is on your last statement. I can help you with that....[etc, etc....]
Click to expand...

LOL. so if you guys employ this technique to ditch AI if you don't like it, make sure you don't ask something too smart, otherwise the workarounds fail!
Last edited: Jan 25, 2020

you guys will get a kick out of this one! I just compiled this message to get ready for the next week: 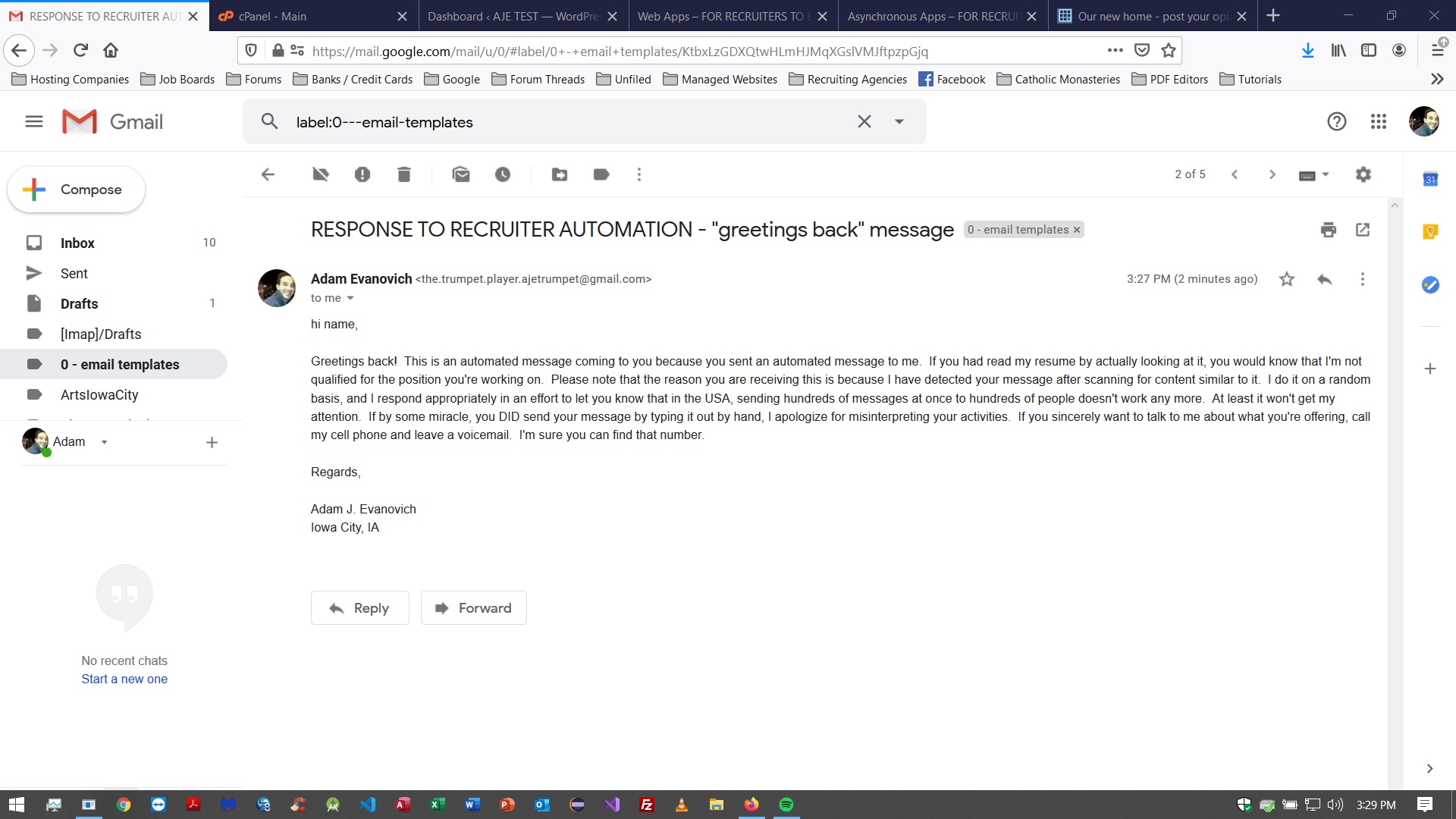 That's alright, Adam. The best way to handle this kind of contact is to remember "Artificial intelligence cannot cope with natural stupidity."

for some reason I still don't understand that quote of yours. can you explain it to me like you would to your grandchild?

here's another great example, or *warning* rather, if you choose to try and get in touch with human beings instead of robots: 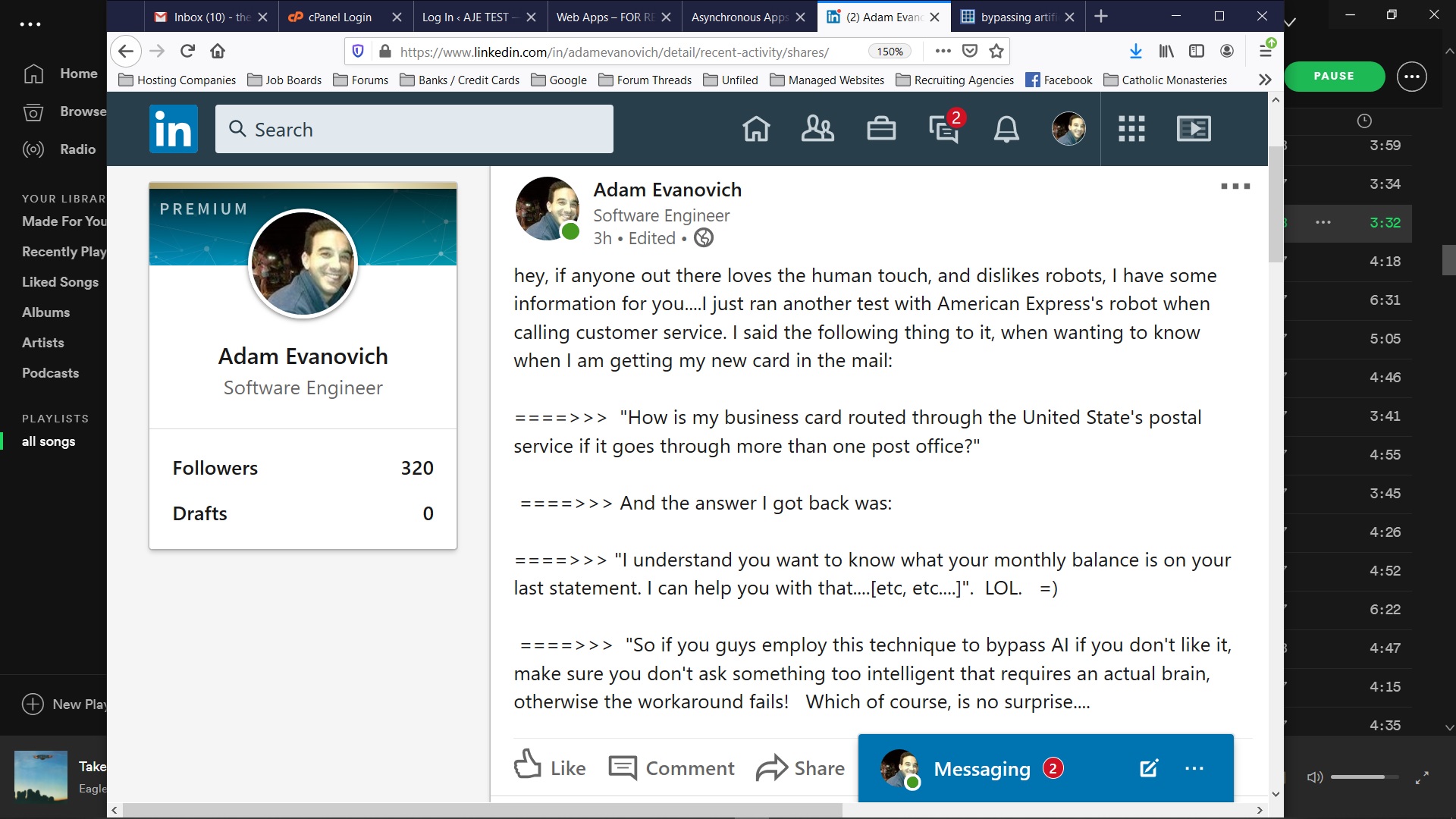 It seems, Adam, that artificial intelligence cannot cope with you. I don't know what else to tell you.

The_Doc_Man said:
It seems, Adam, that artificial intelligence cannot cope with you. I don't know what else to tell you.
Click to expand...

what do you mean by that, sir? Are you saying I'm tearing down the system? I like machines, I just don't like them being forced on me when I know my questions can't be answered by them and it wastes my damn time.

OK, Adam, it is time for me to change tactics. I know you are up to Biblical quotes. I offer you Proverbs 26:4 & 5 for your consideration and enjoyment.

I generally don't read proverbs Richard, because so much of that stuff is a little too "intelligently" written, or rather is more philosophical in nature. I'd rather read the words from the king himself, which are much easier to understand in plain English. But I guess what I should ask here is, are you calling me a fool yet again, like you've done so many times in this thread? If you are, lest we not forget, you would be the hypocrite in that case. So I'm sure that's not the case....

but I'll tell ya man, the way those 2 passages read, it's almost in the same convoluted nature as this (which is in your own language, Mr. Engineer):
SQL:
when doing this as a substitute is just fine:
SQL:
and then let us not forget the classic engineering gates:

have I forgotten any? Wow, this post of mine reminds me of that small business owner from London I wrote an Access database for years ago. 99% of his requests were way off the wall and impractical!

I like machines, I just don't like them being forced on me when I know my questions can't be answered by them and it wastes my damn time.
Click to expand...

And considering the inanity of your posts, ranting about this and that, you AREN'T wasting our time?

You comment on my negativity. I've explained it before. It is a reflection of what I perceive to be YOUR negative attitude. If you don't understand that by now, you never will and I no longer care if you ever do. My position is clear to me and I have been told in a private manner that other folks are surprised at how long I have tolerated you. They see my viewpoint as well and agree: You are a joke, and not a good one. Your behavior may or may not make sense to you, but to me you are a big time-waster. On some forums, you would clearly qualify as a troll. Here, we tend to use that term more sparingly.

You stated, in another forum, that you were trying to get me to see what God wants for me. My response is simple: That which does not exist cannot want anything. At or about age 35 I saw the truth and abandoned any remaining belief in your non-existent God. I won't be going back because once that kind of belief is gone, it is totally gone. Give it up, Adam, just like I have given up on you.

When you get confronted, you divert the topic (such as the logic gates). Who gives a flying fart about logic gates in the context of this thread? I studied them in the 1960s. I may be a Neanderthal in some ways, but we had electronic (even solid-state) computers back then. Since I'm not a computer engineer I am not as fast in some things related to them as I am in other topics.

I know you get the message I am giving out but you have already admitted that you have sometimes tried to spin me up. You succeeded in getting me spun up enough to recognize your near uselessness. No, you are NOT good for comic relief as you commented in yet another thread. You have given bad, ambiguous, or trivial advice to many new people on this forum and in the process have hurt our image. I can forgive you for wasting my time for a while but I have greater trouble forgiving you for wasting the time of the new people who come here to find answers. This is a service-oriented board on which you frequently perform a disservice.

ok Richard. Let us end this one here. no worries. See you around in the "technical" threads. and by the way, you sort of hurt my damn feelings with that ridiculous comment of yours:

then perhaps you are not nearly as smart as you claim to be
Click to expand...

Colin has said the same thing about me in the past. Which is unfortunate for everyone here that gets help from me and the 2 of you.

vba_php said:
here's another great example, or *warning* rather, if you choose to try and get in touch with human beings instead of robots:

I'm missing your point. Wouldn't it just be easier to ask for a representitive.

that's very wise, Moke. I might just try it. thanks for providing that. that's extremely valuable. but I believe the website "get Human" is a 3rd party service that employs people from foreign countries that are not technically AMEX people. just like "JustAnswer.com" and the trolls on the Microsoft forums called "independent advisors". is that correct? even though your image does technically say that they work for AMEX.
You must log in or register to reply here.
Share:
Facebook Twitter Reddit Pinterest Tumblr WhatsApp Email Link