I need to have access send on a daily basis emails to customers which the data is stored in a table.

Any suggestions for the best way, can i just set up access to send the emails? and also attached two pdf files
Last edited: Mar 30, 2022

In the "Similar Threads" list below this thread, there is something titled "Add attachment to email from search result link" that includes some very simple-minded but quite direct code to send e-mail from Access with attachments. Might I suggest you look at that?
N

so this is what i have and it works in that it just sends an email to the first contact in the table, how do i set this to run through all..

You'll need a loop. You're using MoveFirst, but you don't have MoveNext.
N

theDBguy said:
You'll need a loop. You're using MoveFirst, but you don't have MoveNext.
Click to expand...

Thanks
so how would i add that please just add ...

Here is a link to a commercially-oriented educational site that talks about loops and how to set them up.

Loops in VBA allow users to repeat the same code block multiple times until a specific point is attained or a given condition is met.

In overview for your case, you pick two points in your code. Point 1 is where you actually start to build the message. This will be AFTER the point where you create the Outlook app object but before you create the mail object. Point 2 is where you have just sent the completed message and are done with it, ready to start on the next message.

Before point 1 you set up your chosen loop starter syntax. After point 2 you set up your chosen loop repetition syntax. Since you are using data from a recordset, you might want to look at a loop that uses Do While Not recordset.EOF which will repeat the loop as long as you have data. At point 2, two things happen - first, the recordset.MoveNext and second, the Loop statement that repeats the code enclosed by points 1 and 2. The .MoveNext and Loop must occur in the order as stated.

Always remember this: When you create an external app object (in this case, Outlook), you are also creating an internal link, in essence a control channel, between Access and the other object, but that other object is in a separate task due to the way Windows does things. That means that before you are done with this, you must tell your object to close itself down. Otherwise you will leave a "dangling" task for which the control connections are severed when Access exits. At this point the other process is uncontrolled. Oh, it won't DO anything, but it takes up memory and can lead to resource issues. The only way to clear dangling tasks is with Task Manager to find them, then do an End Process manually.

If, on the other hand, you reach the point in your code where the loop exits (because you hit the .EOF condition), that is Point 3 - where you do an object.Quit command before exiting that code segment. Though it usually doesn't matter THAT much, that is also where you would do a recordset.Close as a precaution. Some versions of Windows and of Access have rarely shown issues of dangling recordsets. It's a rare condition that depends on which version of SMB protocol you are running and whether "buffer leasing" is going on at the time. It's easier to just close the recordset and sidestep the question altogether.

Number11 said:
Thanks
so how would i add that please just add ...

Yes, but insert your Outlook code between Do Until and MoveNext
N

theDBguy said:
Yes, but insert your Outlook code between Do Until and MoveNext
Click to expand...

throws up error on "Loop" 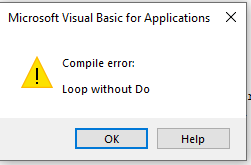 @theDBguy hope you can help me please

Number11 said:
@theDBguy hope you can help me please
Click to expand...

Is that code behind a button? How many emails are we trying to send out?

Code:
should be before the "Do Until" like this:-

No, I would say the New outlook App is outside the loop and CreateItem inside?

This is what I have used in the past.

theDBguy said:
Is that code behind a button? How many emails are we trying to send out?
Click to expand...

Uncle Gizmo said:
I suspect these:-

Code:
should be before the "Do Until" like this:-

changed as above still same issue on the loop

I would be putting the End With after the .display and indenting the code?
N

Moved loop to after
End With and now getting's this error.. 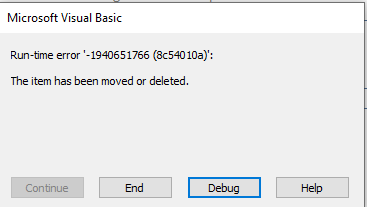 on debug this is the line highlighted in yellow

Resolved it back changing the method - Thanks

Code:
You must log in or register to reply here.

G
issues with migrating to office 365 and outlook emailing

A
Any way to receive a read receipt from emails sent using VBA, without the recipient's knowledge?
2