I am playing around with converting some old code of mine to be a class object so that I can learn a little more about class object manipulation. The object code (and in fact everything in the DB set up for testing) compiles without error, but I get the dreaded "Error 91 - Object variable or With block variable not set." when I try to use it.

The class module IS declared as such. It shows up in my navigation panel as a class module, not an ordinary or forms module. (See included image)

In the form I'm using to test this, in the form's general declaration area I have:

Code:
The form is unbound so there wouldn't be a Form_Current event. Therefore, in the Form_Load routine, I attempt to create the new class object. That is when I get the error on the "Set" line. I can single-step past the offending line and the debugger enters the ParserObj "Initialize" event routine but when it comes back it hasn't been initiated because I keep getting that error. 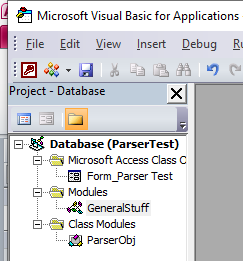 I can only speak for my own personal class module;- "clsCallCalled" and I'm not 100% sure I understand your question, I get the feeling I am missing something.

I have a class module called "clsCallCalled" and I use the following code in a Form to initiate the class:-

I use a DIm rather than a Private to declare the class object variable, which is the only thing different that I see from your example. But then when I attempt to create the object with the New (like you do) it tells me that something wasn't set. The class module is there and should be something I can create with New. My problem, therefore, is that something is blocking creation of this object. Yet nothing shows an error during compilation and practically the first thing I do in the Form_Load routine is to create the object. No other code has run yet to have gotten in the way. I am wondering what step I have left out because from what I have read, I've done everything I'm supposed to do.

I'm wondering if you got the common problem I have, in that you can't see the wood for the trees.

I'm reasonably sure that error message is also caused by missing End Ifs, missing end with, and for next loops not being closed out properly.

Also I sometimes forget to use the SET word for setting object variables and I think you'll get that self same error message if you do that....

Do you have code in the class_initialize event. Although DIM will default to private in scope, it is more specific to use dim.

I have some DIM statements for variables intended to be "local" for the class code but available through LET/GET PROPERTY routines.

The class Initialize event asserts values (setting 0 or "" or FALSE) in the DIM'd variables. For the lifetime of my object, there is a Dictionary object created by the INITIALIZE routine and destroyed by the Terminate routine.

"If not what will happen is that the error show in the form but the class is never instantiated." That sounds productive because I can single-step and see some of the Initialize code but then it just dies. So it MIGHT be a failure to create a dictionary object in the context of the class object.

Actually, I have gotten things moving again. I moved the dictionary creation step to later in the routine, but what I moved DID have a "New" in the right place. The whole project had been compiled more than once. When I tell people what happened next, they stare at me like I've grown another head, but it isn't the first time I've seen this. I put a breakpoint in the Initialize routine and single-stepped my way through it - with no errors. Stopped it, killed all breakpoints, and tested again - and it worked. It's almost like it wanted me to single-step my way through the code once (to show it the way?), then started working. It has certainly got ME bamfoozled. But now I am debugging the main routine and all that is left of it is the tests for end conditions to avoid the "non-finite automaton" case. You put me on the right track, though, MajP, in pointing out that the Error 91 might not have been for MY object. It might well have been for the dictionary object that I use.

UPDATE: I've got everything going except error handling. I think I'll start a separate thread on that one. MajP, I think you were right about the error being something else.
You must log in or register to reply here.

L
Moving a file in VBA

Solved How to count the number of instances of a class?