Does a lack of gender discrimination kill? (1 Viewer)

We cannot differentiate anymore based on if you are male or female. In fact, this gendered language is now on the ban list in congress. However, is there not another side to the story? Take a look at this graph of the death rates between men and women based on Covid: 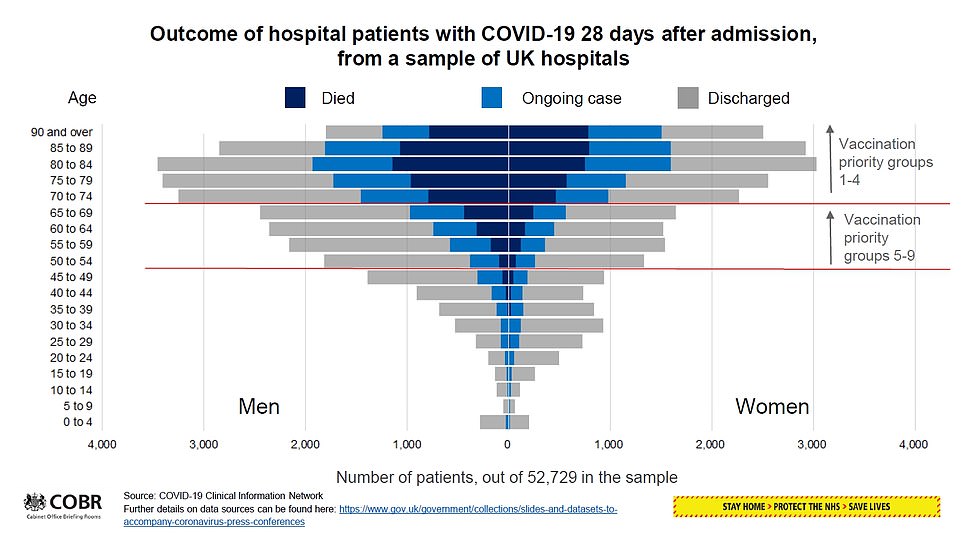 The governments goal in the UK is to minimise the number of deaths from Covid. That is why vaccinations are prioritised for the oldest first, care home staff and medical workers. Yet you can see from the above graph that men are dying at much higher rates than women for each age group. To minimise the number of deaths, you need to segragate who gets the vaccinations first by not just age, but also gender. Women between 70 and 79 are dying at nearly half the rate of men for the same age range yet this clear fact is not allowed to be put into the vaccination rollout due to pressure against gender discrimination.

Is this morally right? Should more men be allowed to needlessly die than necessary, just so we can ignore gender? Is this lack of gender discrimination effectively saying that 1 woman's life saved is worth nearly 2 men's lives? That is what the government policy is basically saying. i.e. we can save 1,500 lives, but we will only save 1,000 lives because we are giving priority to a demographic that is less at risk. The governments goals are in conflict.

At least the UK is prioritizing by age. Here in the US, we're vaccinating 20 year old criminals if they are in prison before the elderly because we're woke. We were going to vaccinate the inmates at Guantanamo but that raised quite an uproar so that was postponed.

Pat Hartman said:
We were going to vaccinate the inmates at Guantanamo but that raised quite an uproar so that was postponed.
Click to expand...

So within the AWF forum, who should get vaccinated first?
P

We need an AI doctor who can scan someone and give an instant probability of death if they catch Covid. Rank it accordingly. But because we are simple humans, we have to do things in a more basic fashion. My point in the first post is that this is a clear case where men are more vulnerable than women to dying from Covid. But I am sure the reason they do not split it is because of gender "equality". Yet there is no equality in this case. Why even bother tracking the statistics of gender if you are not going to use it to cut the death toll?

I haven't yet heard any arguments for why it is best to not factor in gender, except for outcries from gender warriors who will say men can also have babies.

If you look at the chart there are two axis, yet they only decide to use one for the vaccine giving criteria. It just infuriates me that they are prepared to let countless more people die because we are supposed to overlook anything to do with gender, while tracking gender. Look at the 60 to 64 age range, where men are dying at nearly triple the rate of women. But nope, we cannot talk about that can we. Its against the rules. Bloody stupid!
Last edited: Feb 6, 2021

Just come across this graph, which shows the state of play very clearly:

Please note that for the over 85's figures, women vastly outnumber men. So, while the rate of death of men is higher, the extra women in that age group swamp that higher death rate of men. Also note that in the age range of 75-84, there will be more women because guys die about 3 years earlier than average. So the most accurate idea of the rate of death between men and women is below age 74 in that graph. Perhaps in the 75-84 figures men may be dying at twice the rate, but the higher population of women bulk up their figures. Hope that made sense!

Does equality between the genders mean we need an equal death rate and therefore that should determine the allocation of vaccines? Or if a new pandemic came that disproportionately killed women, should we ignore that too, for the sake of "equality"?

Pat, how are they deciding to distribute the vaccines in the US? Perhaps with a woke agenda, maybe it is not done based on risk.
P

Why even bother tracking the statistics of gender if you are not going to use it to cut the death toll?
Click to expand...

Distribution is not based on risk. Sadly, although that should be the objective, the actual objective has morphed to preventing the people who are "important" or "essential" from contracting the disease even though they have very little danger if dying from it and in reality, it would be safer for them to actually get the disease and recover. Why else would Congress be among the first in the country to be vaccinated? Although too many are older than dirt, most are young enough to be in little jeopardy of dying. My garbage man is going to get vaccinated before I can because he is "essential". He's very nice and he's the first one we've had in years that doesn't toss my can's cover into the neighbor's yard, but he's 30.
V

You know what pisses me off? The lack of recognition for immune disorders. Only 11 States even have then on a tier to go after the elderly yet the death rates I've read for purple who are immune system compromised are staggering. They are at newly 20% compared to the elderly at under 10%. They are not being represented in the decisions for vaccination tiers enough. They should be at least equal to the elderly on priority.
V

Hell, most of the elderly that have died probably have immune system issues and would fall under both.
P

It's all pseudo science and if Trump said "protect the vulnerable first", they have to find some other method because Trump can't possibly be right about anything. How many masks are you now wearing when you go out?
V

Pat Hartman said:
It's all pseudo science and if Trump
Click to expand...

Sorry, I forgot you had a doctorate from BS University. Isn't that where Trump went?
P

Did Trump say to "protect the vulnerable"? He did. Why are 45 states ignoring that suggestion?
A

Let's get real, Biden has to fix the climate and men transitioning into women sports first. Then he has convince unions he didn't screw them over. After that he needs four years to blame the other guy. Then maybe he'll get around to why certain groups will never receive vaccinations. Other than that you have nothing to worry about

In the USA, they are doing "age thresholds" for the general population, plus healthcare providers and other first responders. My dear Linda and I are scheduled based on the "age thresholds" since we are both over 70. Linda's nephew is a respiratory therapist in Mississippi and his wife is in the business end of nursing, a services coordinator or something like that. They were scheduled for their occupational hazards.
V

The_Doc_Man said:
In the USA, they are doing "age thresholds" for the general population, plus healthcare providers and other first responders. My dear Linda and I are scheduled based on the "age thresholds" since we are both over 70. Linda's nephew is a respiratory therapist in Mississippi and his wife is in the business end of nursing, a services coordinator or something like that. They were scheduled for their occupational hazards.
Click to expand...

I'm only stating that those with a compromised immune system should also be at the front of the line. I don't disagree with the need to protect health care workers and the elderly.
V

Pat Hartman said:
Did Trump say to "protect the vulnerable"? He did. Why are 45 states ignoring that suggestion?
Click to expand...

The problem is that those with compromised immune systems are not being represented as " vulnerable." They are arguably the most vulnerable based on what the numbers show.

I think all of this depends on how granular you want to go. Too much granularity and it gets too complicated. They need to move swiftly, rather than getting bogged down in precise evaluation of each individuals medical record.

In the UK, they go for the elderly, medics and care-workers first. Then those with certain categories of medical issues, such as diabetes etc. The reason I brought gender up is that they are measuring the variable and it is clearly a significant risk factor. Yet they can take other risk factors like heart conditions into consideration, but not gender.
P

When they are vaccinating 25 year old "essential" workers and prison inmates before the elderly or ill, they are NOT following the real science. They are refusing to follow Trump's suggestion and giving the middle finger to the elderly and the ill in the process.

Occupational hazard is an oxymoron. If you are 25, your odds of dying are miniscule and contracting and recovering from the disease is probably safer for you than taking a new vaccine. Your odds of dying if you catch it and my odds of dying are significantly higher. My garbage man is an essential worker but he has virtually no interaction with people on the job. There's more rational for vaccinating health care workers who work with the elderly above the elderly or ill then there is for vaccinating K-12 teachers ahead of everyone else. The teacher's union needs to be shut down. They have made it clear that they are not in this for the children.
A

Vassago said:
The problem is that those with compromised immune systems are not being represented as " vulnerable." They are arguably the most vulnerable based on what the numbers show.
Click to expand...

illegal aliens will be taking cuts in front of you and your family members now that Biden has an open border policy. Congratulations, it's a liberal dream come true. ps.
You must log in or register to reply here.

The End of Equal Justice for All
2 3

Can We Be Too Clean (Ultra Sanitary)?