I have had some people ask questions on working with Hierarchical data, which always also involves using recursion and treeviews. If not familiar with recursion this is where a procedure repeatedly calls itself until hitting a condition where it is told to stop. This is used often where you have to span something like a file directory with an unknown amount of levels and branches. Also common in Family trees and working with assemblies sub assemblies. These usually go until they hit the end of the branch.

Code:
so the output is:


When working with hierarchical data normally each record references a parentID in the same table.

This would give the structure

In order to get it into a proper order you can sort it. I made a field called sort, one called level, and path.
The sort puts it into the node order, the level is what level of the tree, and the path is the list of parents. So the path for 5 is 1,2,4

Here is the recursive code to span the tree. The process is the same for filling a treeview. Some people will do this in a single procedure, I do the base nodes (1 and 7) in a separate procedure because it is easier. You need a public variable for the recordset and in this case the sort.


Code:
The above procedure is for the base nodes and it is not a recursive call. The base in this case are records where the parent ID is null.

The above procedure calls the recursive procedure that spans the branches for each base node.

Working with treeviews is pretty code heavy, but like I done in other classes where I wrap a control in a custom class I have done the same here. If you build your query as instructed in the class module you can build a tree view with a couple lines of code. (@moke123 @Tera) There are a ton of helpful properties. It is still a work in progress, but I have kind of gave up because I was running 64 bit, and thus coded the same in the MSFORMS version.

AFAIK the treeview control is no longer supported in 64 bit versions (but I have to check if there is an update). So there is a free version done with MS Forms control.

If you look at the demo you can see that you can use a union query to fake hierarchical data. I combined Orders and orderDetails. So you can do any one to many or many to many. I demo drag and drop and will come back and update this demo to show how you add nodes/records, and delete nodes/records. I have drag and drop enabled for some of the trees.
If anyone is further interested just hit me up, because it would take me pages to explain all of the capabilities I put into this.

Here is the table using the sort routine
Query1

I also had to deal with recursion after I retired because of getting involved with Ancestry.COM and their GEDCOM files, which are flat-file representations of family tree data. I can tell you unequivocally that logically building / populating the family tree was a mess - but it was even crazier to try to analyze it. Still, I got it working until some yammerhead on the Ancestry site screwed up his tree and then THIS yammerhead (ME) was tired one night and imported a screwy tree segment without checking it thoroughly.

As I'm trying to integrate with my existing database, here's the 1st issue when I compile.

"User defined not defined." Also does it matter if I'm using Access 2019 32 bit for any of the code?


Code:
Looking at the TreeView class in my database it is MSComctlLib.TreeCtrl.2. Different from yours as COMCTL.TreeCtrl.2.

Thanks, Good point. The Treeview is part of the MS common controls 6.0 active X. You likely have to add this reference. Click references, browse, and select OCX. Easy to find it is in all capitlas. 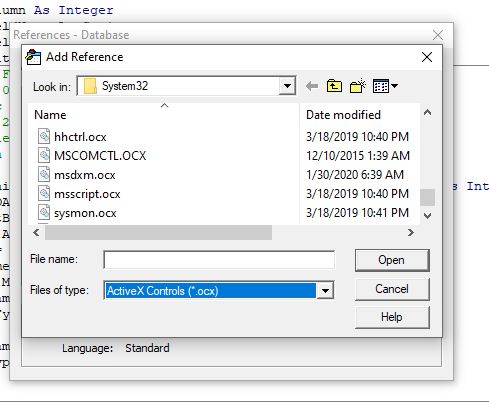 @dgreen I added an updated version to the original thread that has drag and drop capability. Could not find the problem. Had to grab an older version of code, so hopefully did not break anything.
D

@MajP query1 error on opening .sort? How did the path get populated in the t_E2E?
D 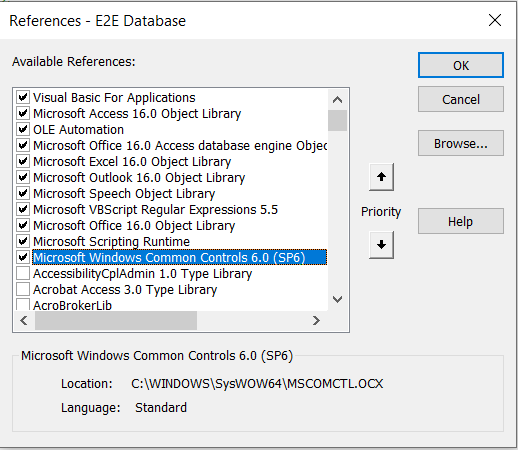 So, is the version you've got me using an older version?

I do have the common controls as a reference, so I'm not sure what's next????


MajP said:
Thanks, Good point. The Treeview is part of the MS common controls 6.0 active X. You likely have to add this reference. Click references, browse, and select OCX. Easy to find it is in all capitlas.

@MajP Did your code create the Level and Path fields in my table?

dgreen said:
@MajP Did your code create the Level and Path fields in my table?
Click to expand...

Yes that was the point of the first code. You have to add the fields. All the code is there. The MajPsort module is the code that will do the sorting.
Last edited: Feb 23, 2020

@MickJav
I am not sure if this control is supported in 64 bit so consider that for portability. However, this post seems to suggest it is

social.msdn.microsoft.com
I cannot test it since I am running 32. I love tree views for data presentation. My biggest beef with Access is lack of a reliable native unbound grid control and native treeview.

@The_Doc_Man Not quite that bad, no one was their own parent. But I helped on a very interesting thread

I do have a difficult project that is similar to what you are on working, that is why I approach you. OK sounds interesting. I would just post it and people will reply. It may be an area that someone has expertise. Unless it is really COI because now I know more about that than ever wanted...
www.access-programmers.co.uk

I did the calculations and assumed my results were wrong. In the first pedigree the Father was also the Grand Father and the current parent. Gross! I thought my code was incorrect, but I forgot these were breeding birds and not people. This was not West Virginia. The calculation was mathematically interesting determining how much of this inbreeding occurs, and gives a value for how in-bred any bird is. Obviously less is better, but at the same time you want to breed your prize birds as many times.
D

@MajP I've taken the code, queries you've built and copied to a new Access database. I added 2 new columns to the t_E2E (Path and Level) but left the values blank. I've linked all the code on frmE2E to the VBA (Form - on Open, on Close, Buttons for the Expand, Collapse, etc...). My references match the database you've provided me.

When I open and close frmE2E I'm getting an error that a user-defined type hasn't been defined. I'm stuck... See attached, to hopefully show that I'm not going crazy.

MajP - some years ago, not less than 10 I think, we had a thread from a pigeon breeder for whom having his birds do a little inbreeding was normal. Supposedly comes from various birds where a flock has an Alpha Male. It is not uncommon for the Alpha to go after his own daughters and granddaughters. Happens among chickens, certainly. Also happens among certain herds of herbivores. And carnivores too, like wolf packs and lion prides. Been known to happen among humans only rarely.
D

Disregard. I pulled in the wrong VBA code for the treeview.

@dgreen
I had some left over modules. You kept the bad and deleted the good one. Needs to read "TreeviewForm" the one listed "TreeviewForm (newOld)" will not work. Also, there are some settings in the tree view that I cannot figure out. I had to copy one of mine. If the settings are not correct you do not get the + symbols and cannot expand the tree.

@The_Doc_Man So what I was saying was not only do you learn Access here, but you can learn things you never thought you wanted to learn. I am now one of a small group of people who can code in VBA coefficients of inbreeding. So that is a great bar trick to have in the bag.
D

It's working now. Can expand and collapse the tree and branches. The subform is linked and updates based on the treeview value clicked.
Open askers:
1) How to get the sort sequence of a query to match the treeview sequence?
2) Click a record and move it up or down. Right now drag and drop puts it at the top of the group when you drop onto the parent.
3) Linking an image to a node (pictures stored on the user's computer folder)
4) Using a search box to find a value and have the treeview expand to it.
Last edited: Feb 23, 2020
D

@MajP again thank you for getting me this much further.
@The_Doc_Man great side bar conversation.
You must log in or register to reply here.

Solved Attaching multi images and a pdf to outlook

H
List files to table and include date modified