I've just come across something which I think will, perhaps, make a big improvement to the technical forum areas. I'm doing the research right now and then perhaps switch it live to get some feedback. I think most of you will really like it but I can never be sure!

What are the opinions on Best Solution and Voting features? By Voting, I mean rating a particular post.

Just found out that the availability of the above features is later this year. I jumped the gun. But still, I would like some feedback to those questions.

Jon said:
What are the opinions on Best Solution and Voting features? By Voting, I mean rating a particular post.
Click to expand...

Agree with DBG although I also remember that feedback from most callers is either non-existent or vague because once the problem has been solved, they are out of here and on to the next question. So getting an indicator of the post that solved the problem might be problematical.

they've been doing this on Stack Overflow forever, I believe.

Since the update for Ignoring things, I seem to have lost the ability to "see more" on the What's New page.
In fact, I thought I could set a number for the number of threads to view on a page but can't find that either.
I also would like to remove the Latest Profile posts from that page and just see more threads?

The Latest Profile Posts seem rather a weird thing to have on general view to be honest, they are virtually PM's?

@Minty Do you see the View More button on the bottom right? Can you tell me what forums you have blocked so I can test this?

The Latest Profile Posts are not PM's since they are not private, they are public, though I understand what you are getting at. There is a limited amount of customisation possible, like with any software.
Last edited: Sep 3, 2020

@Jon,
I have View More on the What's New page?

@Gasman Are you blocking any forum sections?

Jon said:
@Gasman Are you blocking any forum sections?
Click to expand...

Shock horror!! I am curious if that has improved your user experience here or not. Any feedback on that?

I'd have to say yes, by not having to see all the politics threads. Then again, I would not know if any have been posted since I ignored the forum.?
If there have been any then I am not seeing them, and that is fine by me.

There has been tons of them, so I am pleased that you have the peace that you seek!

Jon said:
@Minty Do you see the View More button on the bottom right? Can you tell me what forums you have blocked so I can test this?

The Latest Profile Posts are not PM's since they are not private, they are public, though I understand what you are getting at. There is a limited amount of customisation possible, like with any software.
Click to expand...

That's weird it's back !

It had vanished completely. Probably a glitch in the Matrix

@Minty Glad to see its sorted! Which forums did you block and has it made much difference to your user experience here?

Politics is the only one currently, but I might add the watercooler or at least some of the threads. + YKW obviously.

It has already improved my experience - thank you.

Great stuff. Thanks for that feedback.

Jon you already probably caught my opinion on the Solved feature so I won't repeat quite all that here. But I appreciate this question because I feel that it's a step in the right direction on the whole thing--A vote feature would be a step towards the "much better" paradigm of evaluating design by polling experienced or at least 'peer' level designers, as sharply contrasted with the 'Solved' feature which leaves the decision up to the person least qualified to evaluate the design...the very person who had the question in the first place. (Sounds harsh, but true - Think for a moment about the concept of a Code Review at work....The person who stamps the approval on the code review obviously isn't the person who designed it!...And even more so in the case of the person who had the question they couldn't solve. When I was on a SQL Server dev team in my last job and had a question about partitioning, hands down the most valuable thing that comes out of that is the combined wisdom of the 5 more experienced colleagues who answered my question & provided insight--not mine).

The vote feature is more in line with higher level development forums as well as solid design/feedback/research principles. It's much more meaningful because it represents a wider base of developer opinion. 20 developers' cumulative opinion is usually going to be better than one OP's. Just the way life goes & I would apply this same principle to myself every time I have a question. It's nice when I think my problem is 'solved', but it's 10x as valuable to know what a global development community thought about the various ideas presented (if I am being an honest developer).

I vote for anonymous upvotes, if such a feature would be available.
PS..I guess there is some distinct advantages to both Solved and a potential Vote feature. The Solved at least lets people know the OP is no longer struggling. Some members will prefer to focus on that metric and move on. But having the Vote is a 'nod' to the value of the whole other side of it, which would add value to the site and bring it to a higher level, I think.
Last edited: Sep 3, 2020

Version 2.2 of Xenforo will have these voting and sorting features: 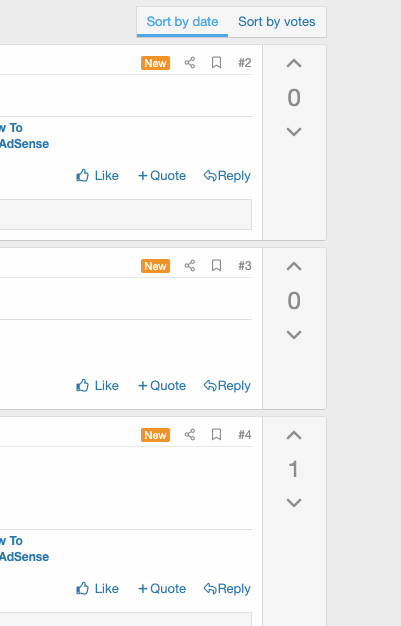 I think it is very useful to just click a button and then get the posts sorted by votes. Great feature.

There is also the Solution button:

It puts the "Solution" post just below the first post, and you can click the View full post button to go straight to it. I used those all the time when I am on other platforms with this feature. Being short of time, it means I don't have to trail through lots of posts to get there. But you can still read the entire thread if needs be.
You must log in or register to reply here.