I just came across this tweet today by a civil rights lawyer:


https://twitter.com/i/web/status/1384667861642358785
The tweet talks about "another" police shooting of an "unarmed" 15 year old girl. Well, it is pure lies! She was armed and trying to stab another black woman in the head, and she was 16. What followed in the comments was an outpouring of words for how this never stops, we can't call the police, defund them and so on. But it is all based on lies. Read the list of replies and you will see how people are just deceiving themselves. They are locked in an echo chamber of lies and don't care about what really happened, because it goes against their narrative.

What you are witnessing is essentially a repeat, by the left, of their Vietnam anti-soldier hate-filled pariah mantra. Today's anti-police pariah vilification seems much more hateful. In the 1960s the left proclaimed that it was the wanton killing of Vietnamese babies. Today the deplorable narrative by the left is the selctive killing of Blacks. Ironically, the left today does not appear anti-military like it was back in the 1960s.

Wow Jon, that's really amazing. I feel that we are witnessing new levels of deception each month or so. It used to be the idea that there was an epidemic of police killing unarmed African American men. A quick review of of the numbers shows this isn't the case. But America quickly moved beyond that without reviewing the facts.

Your screenshot of someone just brazenly lying about them being armed is beyond the pale. Wait I think I know this one ... Fake News.

Imagine two people are involved in a car crash. It happens like this: Driver1 is driving on a divided highway (several lanes going only in his direction). He encounters Driver2, who is going the 'wrong way' (common drunk driving situation). Driver1 swerves to the right. Driver2 then swerves to his own left (Driver1's right), so Driver1 swerves to the left--but only just so late, as Driver2 was also just reacting similarly. And so on and so forth until they crash.

Imagine that after the crash, people scratch their heads with amazement, asking the last driver who swerved, "Why did you swerve to the right? When it turns out the other driver was swerving in the same direction by the time you collided?" The driver answers with amazement: "Don't you have any sense of the limitations of a reflex? By each time I realized I'd swerved the wrong way, it was too late - my hand already was moving the steering wheel, I wasn't able to keep up with the most current 'reality' of the situation, there being only fractions of seconds in between".

But that's what many people did in the Adam Toledo case. The kid has a loaded gun, and was evidently just involved in a crime involving that very firearm. Holding the gun, he starts to swing his gun toward the officer. The officer makes a decision to shoot. By the time all is said and done, the kid has his hands up, with no gun in them. Less than one second - even according to a major leftwing media outlet - elapsed in between the time he had the gun, and the time he was shot.

Less than one second. And we're all supposed to pretend that we don't all know what happened? Clearly the officer's brain told his hands he was going to shoot prior to such time as he was capable of the "don't shoot" reflex that may have naturally occurred subsequent to the dropping of the gun.

Have we just gone completely mad?? AB is right, these are times when common sense is in very short supply.

Wouldn't any rational person's response be to direct 3/4 of their outrage at whoever was supposed to be parenting this 12 yr old who was out shooting at people with guns in the middle of the night? I mean that can go either way, but if you're going to pretend to be outraged, at least be rational as to where to direct it..

I like this guys channel. Ex-cop and gives a good perspective on this case. The whole video is good, but go to 7:53 for a part that sums it up nicely.

Officer Tatum is good place for alternative opinion, but the more we share his links more likely he will be canceled.

Well, it's possible to infer a lot from that video, which doesn't mean it's correct. I get the impression that the guy presenting the video is fed up with the constant gang violence in black communities. So what's the inference? Police officers go to certain areas/Communities and expect to see people with weapons. Not just waving a gun around to scare people, but actively using them, and competent in their use. In other words very dangerous situations. The inference is I would not want to be a police officer in America right at this moment! I like that I now have a better insight to the problem....

This guys channel is also good. Here is his take on it:

So, the police officer who came to the knife fight was supposed to just stand there and allow one girl to kill the other and then arrest her after the fact? In what world does this make any sense?

I don't know how prevalent Tasers are but this would have been a good use of one if it were available.

New policing policies will remove guns and replace with a pea shooter.
A

Answer: Quit retire immediately before you're fired or worse. Move to Idaho where LeBron James and other Hollywood thugs can't find you.

Revision: Answer: retire immediately before you're fired or worse jailed.

Kellyanne Conway just made the comment that if the police officer did nothing, and the woman being attacked died, that this would be a non-story since it does not fit the narrative of racist cop killing a black person. Though Conway did not say the following, it does follow the narrative that Black on Black crime is ignored by the media.​

One of the protesters was holding this up: 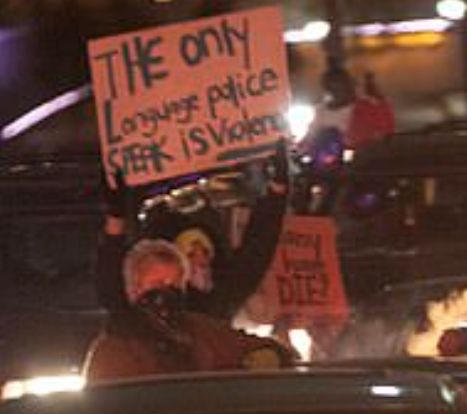 If that is the only language police seek, then what is this: 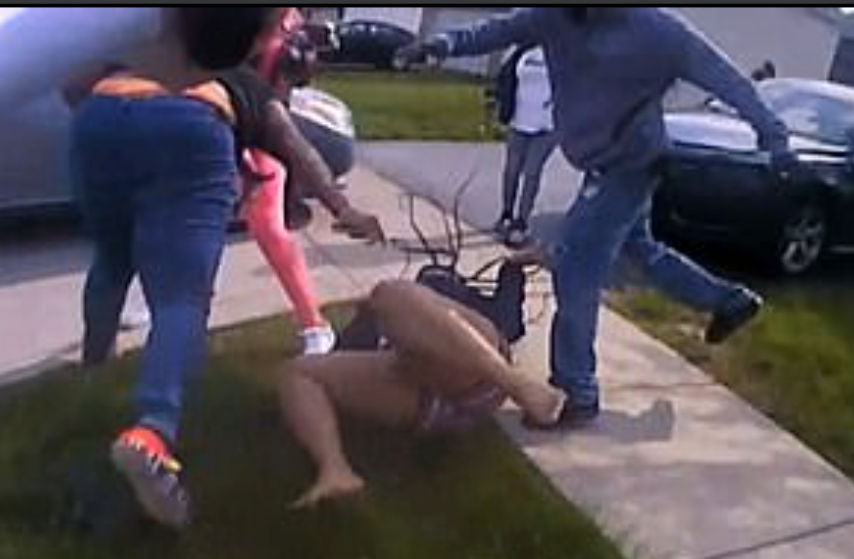 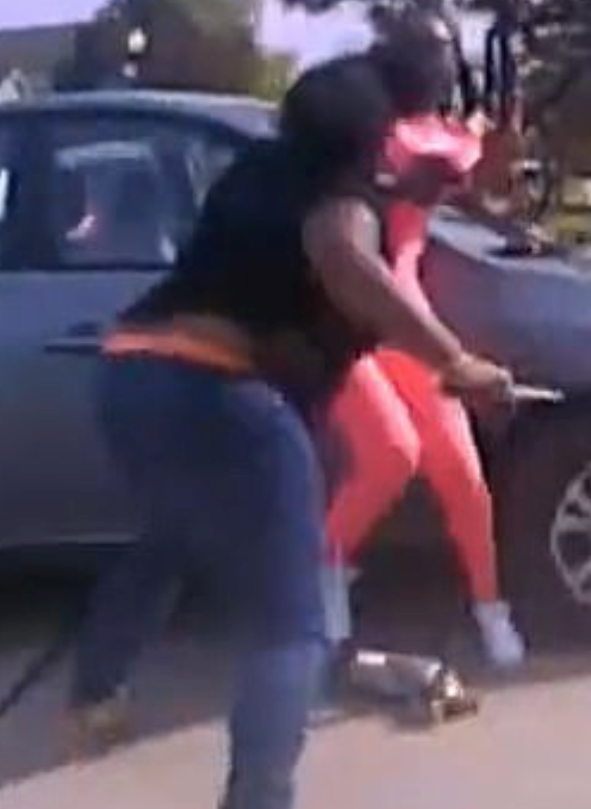 Imagine this scenario: white cop is about to stab black woman in the head and black civilian shoots officer dead.

Welcome to the newly legitimised racism.
Last edited: Apr 22, 2021
A 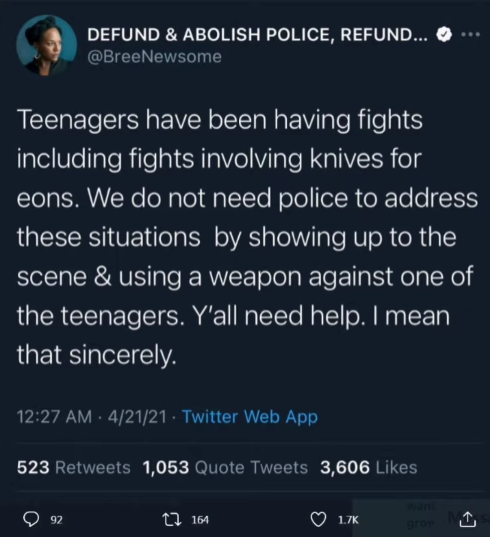 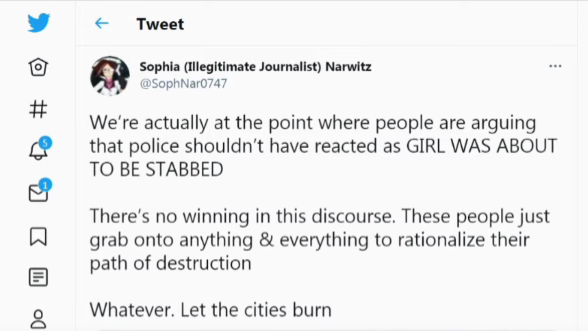 Please America, can we just have a show of hands? Who wants to live in a place where when you're about to be stabbed in the head, a police officer uses deadly force to save your life. Now who doesn't? Ok great, most people come down on the side of Civilization As We Know It.

Now where do we go from there? Or was that exact question just answered ...

It reminds me of the great lie fed during the early stages of the pandemic: "Masks don't work. Instead, save these masks for the medics who need these things that don't work." My words, but virtually identical to what they were saying.

Now you have Biden et al constantly banging on about white supremacy, systemic racism, and Le Bron with 50 million followers threating police officers who are trying to help the black community. It is the new big lie. "Don't look over there, look over here! Police shot a black again!", whilst ignoring attempted murder by the stabber and the guy kicking the woman in the head. How about cleaning up your lens a little bit, zoom out and stop being so myopic about it all. It is utter stupidity. They talk about police accountability, well how about some accountability for the continuous stream of nonsense coming out of your mouth!
Last edited: Apr 22, 2021

It certainly appears to be a justified shooting. Hard to tell angles from the video but the cop is certainly lucky he did not shoot the girl in pink also. I dont know how proficient you may be, or think you may be, but that was a risky shot.
You must log in or register to reply here.