This is a really well written article on tax proposals. Bernie’s Tax the Rich Bluff Just Got Called by His Fellow Dems (msn.com)

For years, socialists and progressives such as Bernie Sanders and Elizabeth Warren have enticed voters with free-lunch promises of a European social democracy financed mostly by new taxes on millionaires and large corporations. Now that Democrats have full control of the White House, House, and Senate, they can no longer blame Republicans for blocking these taxes. Instead, basic politics and simple arithmetic won out.
Click to expand...

Despite Biden’s complaint about how his agenda has been held up by “two members of the Senate who vote more with my Republican friends,” the Democratic opposition doesn’t end with Joe Manchin and Kyrsten Sinema. Numerous other powerful Democratic lawmakers have quietly whittled down the tax package while letting those other two take the heat. Nor can this opposition be dismissed as purchased with corporate campaign donations. Bernie Sanders and Alexandria Ocasio-Cortez have shown that left-wing, anti-corporate views can also raise enormous sums of money, and besides, unpopular “pro-corporate” policy views require extra fundraising for ads to repair the reputations of lawmakers who play ball.

Instead, these tax-the-rich proposals collapsed because many of them proved to be unworkable, unwise, or (in certain states and Congressional districts) unpopular. It is economic malpractice to propose a new global tax system that applies a 15 percent minimum tax rate for multinational companies across the OECD—and a 21 percent minimum tax rate for American multinationals. Many Democrats also balked at restoring the highest corporate tax rate in the developed world. Farm-state Democrats were never going to support pairing the existing estate tax with a new capital gains tax on assets passed down at death. And without that policy, President Biden’s proposed steep capital gains tax rate increases become easier to evade and thus will raise little revenue. Finally, giving the IRS additional information on Americans’ bank accounts was never going to fly in swing districts.
Click to expand...

The progressive math problem would still apply in a government filled with Bernie Sanders’ acolytes. The numbers simply do not add up. Even seizing all $4 trillion owned by American billionaires would fund the federal government one-time for just eight months while slamming every 401(k), as most of this wealth is stored in the stock market. Annually seizing 100 percent of all household income earned over $1 million would not even balance the budget, and Alexandria Ocasio-Cortez’ proposed 70 percent income tax bracket would finance 1.2 days of federal spending!
Click to expand...

In fact, let’s add up all the common progressive tax proposals. Repeal the 2017 tax cuts, create 70 and 50 percent income-tax brackets, and cap the value of tax deductions. Raise capital-gains tax rates, apply them annually on paper gains and also at death. Apply Social Security taxes on all wages. Impose President Biden’s corporate tax increases, as well as Elizabeth Warren’s “real corporate profits” tax, and tax financial transactions (such as stock trades) and financial institutions. Finally, impose a carbon tax, Bernie Sanders’ 8 percent wealth tax, and his 77 percent estate tax. Layer all of these taxes on top of each other without regard to policy interactions, economic effects, or combined tax rates exceeding 100 percent. All of these taxes would raise approximately $13 trillion over the decade (or 4.5 percent of GDP), according to CBO and other mainstream public tax scores. Barely enough to balance the budget for the next decade, and then fall back into deficit thereafter. Certainly not enough to bring European social democracy over here. If America wants to copy European spending, it must also copy European taxes, and that means slamming the middle class with value-added taxes of around 20 percent, and drastically higher income and payroll taxes.

This math problem begets a political problem: Americans support progressive policies only if the new taxes to pay for them are limited to the wealthy. A 2019 Harris poll revealed that half of Democrats would oppose steep taxes on multi-millionaires if they were among the wealthy themselves. More broadly, polls have long shown that less than half (and sometimes far less) of Americans are willing to pay much higher taxes, even for more government services.
Click to expand...

Thank you, @Isaac - good article. And it proves what we knew all along. Democrats won't be happy until NOBODY has any money.
P

Democrats won't be happy until NOBODY has any money.
Click to expand...

If you read between the lines there will be ways for them to escape the draconion taxes just as they pass laws to exempt themselves from laws atainst profiting from insider trading and to exempt themselves from having to be vaccinated or loose their job or from having to participate in ObamaCare. the average American should have recognized just how bad ObamaCare was when the news came out that Congress had exempted themselves, their staffs, and their union buddies. Only the people who don't matter were subject to ObamaCare. The special people are always taken care of like these days it's the people crossing the southern border illegally. They don't get tested for COVID. They don't need to subject themselves to vaccination. They don't need to show photo ID to get on the planes that ICE rents to shuffle them to wherever in the country they want to go. This really has to stop folks. I know there are still Democrats out there who are aghast at what their party is doing to the world, not even just to Americans.

Just to remind you who actually pays taxes in the US. 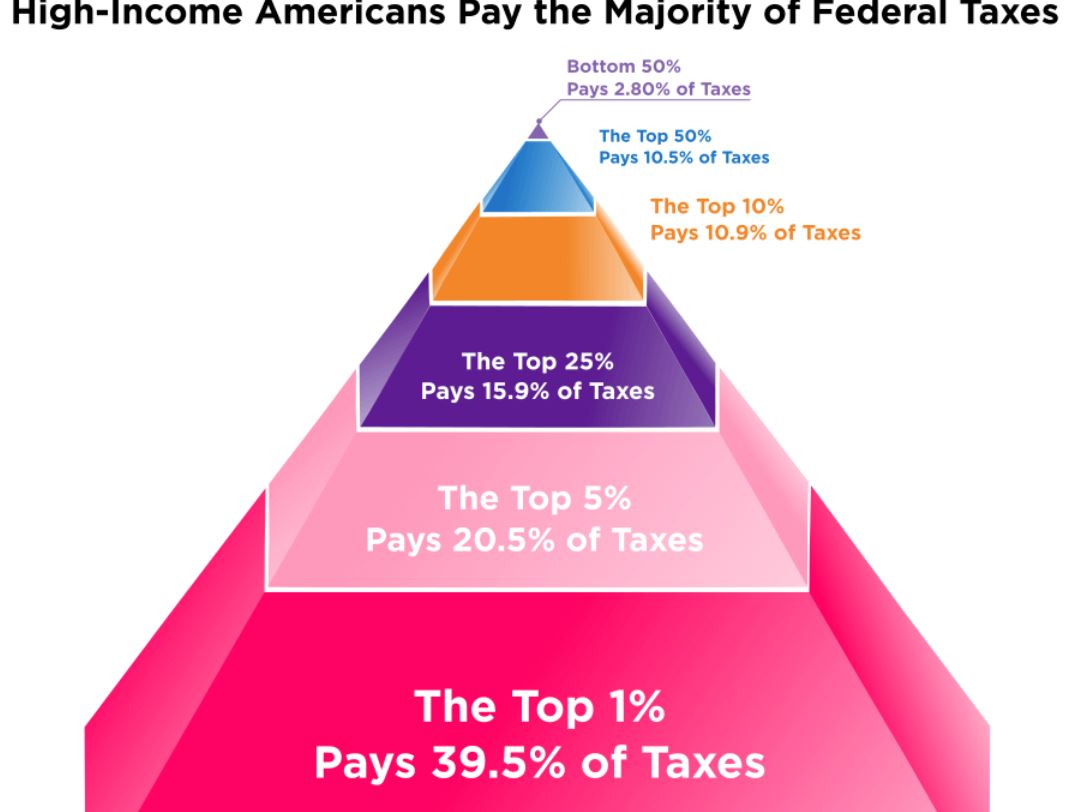 The issue is deeper than simply: "the number don't add up"; which is obvious. The Democrats know how to sell their utopian narrative to the gullible. The Democratic narrative sounds great until you look into the, as yet, undisclosed "fine print". As it stands now, Pelosi is once again proposing that the Democratic tax legislation be passed before it fully written and open for proper vetting. Technically, this is illegitimate.

One of the goal posts of the Biden administration is that your income taxes liability would not increase provided that your income is less than $400,000. This is haf-truth or more appropriately a lie from the perspective that the Democrats will be pursing imposing other taxes.
Then there is the issue of "corruption", however you want to define it. Basically will the rich, those making over $400,000 actually pay more in taxes? Well, the Democrats have already implied that the rich may be getting tax breaks. One tax break, the restoration of the SALT deduction. Dems' Plan To 'Tax the Rich' Might Include a Huge Tax Break for the Rich. Next there is the well know fact that the rich can afford lawyers who can find or manufacture loopholes in the tax code to avoid taxation. Seems that Biden has disingenuously dipped into tax avoidance: Biden demands wealthy pay 'fair share' after reportedly owing $500K in back taxes. So even those proposing tax the rich though legislation attempt to avoid paying taxes when they can. That immediately raises the potential that the members of Congress and the President will attempt to carve-out exemptions for themselves with any proposed tax legislation.

As an interesting side note: Pandora Papers Reveal How The World’s Wealthiest Hide Assets. Along those lines, the super rich commingle with many members of Congress. Through that association, we may find that some companies are amazingly exempt from any new tax code requirements implemented by the Democrats.
Last edited: Oct 15, 2021
P

The rich could pay more but it isn't the rates that should rise, it is the deductions that should be removed when they only benefit the wealthy. This is the cover for all the ranting members of Congress do about taxing the rich. It's done with a wink, wink. The public is too stupid to understand what we're really doing. Don't worry, we'll just rant and rave but we won't forget you. Here, take these nice deductions we created especially for you. And those deductions that benefit the lower and middle classes should be increased such as the medical deductions. On top of the $5,000 in premiums my daughter pays for her and the twins, they have a $6,000 deductible. $11,000 is an awful lot of money to a single mother earning less than $100,000 per year especially when they are living close to the home they grew up in in Fairfield County, CT.

It used to really irritate me back when Obama was President that my husband and I earned less than half of what he did and our marginal rate was higher. How exactly is that fair? It just proves that the wealthy don't actually pay what the charts say they are supposed to pay and STILL they pay almost 40% of the total amount collected.

Pat Hartman said:
It used to really irritate me back when Obama was President that my husband and I earned less than half of what he did and our marginal rate was higher. How exactly is that fair? It just proves that the wealthy don't actually pay what the charts say they are supposed to pay and STILL they pay almost 40% of the total amount collected.
Click to expand...

An irony. Trump was accused by the left of somehow avoiding paying his "full" tax burden as if it was some sort of evil. Trump responded that he was merely using the tax law as established by by the Obama administration.
P

Yes, but is Biden using the tax law to avoid ~ $500,000 in payroll taxes legally or illegally? And since he is the president, could he be prosecuted for tax evasion? How about the Doctor. She in't the President

Speaking of funny terms, I read something that just made me laugh. No comments really, I just found it all very funny.
Maxine Water's daughter - the one she illegally pays from her campaign money - is actually named KAREN.

Pat you make a good point about deductions.
I say everyone pays 20% from rich to poor, let's write it on an index card, Steve Forbes, and move on. No deductions, credits, or any other tricks utilized to force compliance with a million other, non-tax-related agendas!
P

The thing is, it could probably be less than 20% as long as there were no deductions. The problem is that even 10& hurts the very poor so there would probably still need to be a floor of around $20,000 for individuals and $50,000 for maried with children. That means $40,000 for a married couple without children which is too much but we don't want to discourage people from getting marrid. My husband and I figured out one time that it had cost us $100,000 + to be married from the time my daughter was 3 and when she turned 18 and was no longer a dependent because if we weren't, I could have filed as head of household with my daughter as a dependent and he could have filed as single. But as a married couple with approximately equal incomes, we got screwed by the tax code.
You must log in or register to reply here.

Who Owns the Unites States: Russia or China?
2