Suggest a movie to watch (1 Viewer)

I'm a fan of movies. In fact addicted.
Although most of day I'm working, But there's not a single day I don't watch something from an available streaming channel during break time or lunch time.
I mostly watch movies from Amazon, Netflix, Hulu and two others local paid services. When I don't find what I want to watch on these channels, then it's time to go to a nearby rental DVD shop or send an online order.

I think Gone With the wind was the first movie that had a deep impact on me. I read the novel 3 times in a row, and several years later I watched the movie. That movie did the magic and after a while, I felt the desire burning within me to go to a theater, buy a hot dog and popcorn and admire what was on the screen.

For the first 30 or so years, I only watched movies from Hollywood, but little by little the lost the sense. It was getting harder and harder to find a remarkable movie from Hollywood. Nowadays, I choose UK movies for SF & human drama, Spain for mystery & suspense, US for action.

I normally don't watch comedy except if it's an outstanding one. I also don't watch any movie with bellow 6.0 points in IMDB.

That said, it's getting harder and harder to find something that a)Is worth watching b)I've not watched.

Now my request.
I appreciate if you suggest a movie you think is worth watching. Don't mind my rules about. I just want you to suggest something you think was a good one.
I know when it comes to movies, personal taste is a main factor and what may be excellent for one, may worth nothing to the other.
But I accept the challenge and will watch it.
It may take a while to watch all suggested movies because I have to divide a movie to several days and watch them while eating lunch or taking a break for a cup of coffee, But I really need your input here.

Reservoir Dogs 8.3 on the IMBd

I like just about anything directed by Clint Eastwood. Maybe "The Mule" or "Changeling"?

Here is a good feel-good movie you may not have seen. For sure a slight bit cheerier than Reservoir Dogs.

www.imdb.com
And does not matter if English is not your primary language, cause it is mine and I still need the sub-titles.

Micron said:
I like just about anything directed by Clint Eastwood. Maybe "The Mule" or "Changeling"?
Click to expand...

I've already seen them. Maybe all of his movies. (except Dirty Harry series).
I loved The Bridges of Madison County, Million Dollar Baby, Unforgiven & Gran Torino most of all

AccessBlaster said:
Reservoir Dogs 8.3 on the IMBd
Click to expand...

I've already watched it.
I love Quentin Tarantino and have seen most of his movies:

Thanks for suggesting. Although I don't like Guy Pearce personally, but I've watched that movie. It was a good one.

Gran Torino was great!! And I had one too, although it was one year older than the one in the movie. I still dream about that car sometimes.

You said something about a bad ending earlier (Winter's Bones). Is the ending worse than the one in No Country For Old Men?
Have you seen The Imitation Game?

How about something a bit closer to home...? 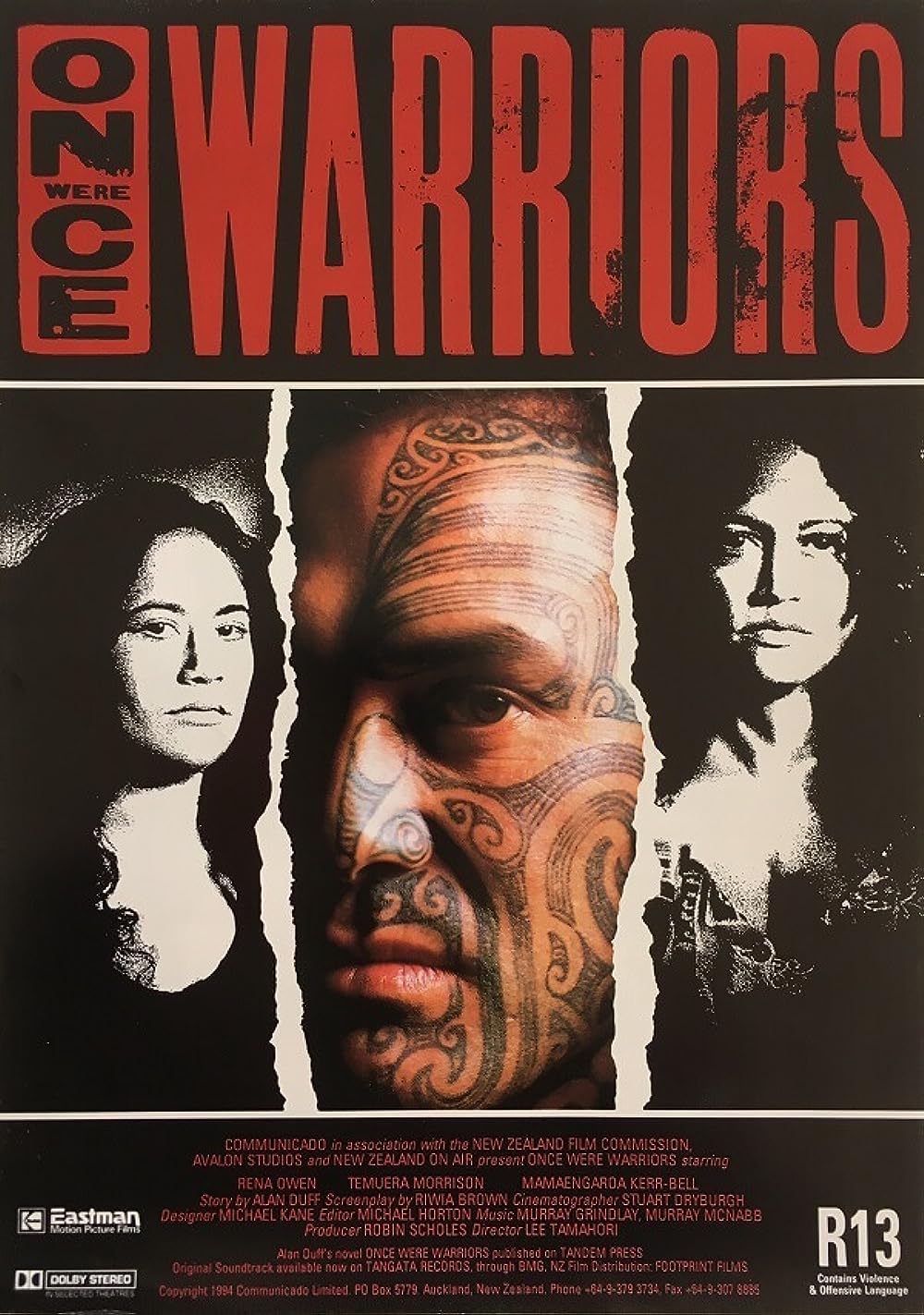 Once Were Warriors: Directed by Lee Tamahori. With Rena Owen, Temuera Morrison, Mamaengaroa Kerr-Bell, Julian Arahanga. A family descended from Maori warriors is bedeviled by a violent father and the societal problems of being treated as outcasts.

Thanks for suggesting.
The first two will be a challenge. 40 episodes and 48 episodes. It will take a while to go through all of them.
I've already watched the rest.

Micron said:
Have you seen The Imitation Game?
Click to expand...


Micron said:
You said something about a bad ending earlier (Winter's Bones). Is the ending worse than the one in No Country For Old Men?
Click to expand...

The bad ending I mentioned was meant something I didn't expect. I don't say anything here, because it may be a spoiler for those who haven't watched it, but it wasn't definitely what I expect.

In case of No Country For Old Men, I've watched that too. I simply didn't understand why the rating was 8.0
I rated it 5.
D

MajP said:
Here is a good feel-good movie you may not have seen. For sure a slight bit cheerier than Reservoir Dogs.

www.imdb.com
And does not matter if English is not your primary language, cause it is mine and I still need the sub-titles.

Added to my watch list. Thanks for your insight.
A

Already watched. I love both Willem Dafoe & Sean Patrick Flanery and have watched most of their movies. It's a pity to see Willem Dafoe ruining his reputation with acting minor roles in so many movies.
M

A little bit old, but "The Martian"?
I'm beginning to think that you have seen anything I have seen, and so much more.
D

Micron said:
A little bit old, but "The Martian"?
I'm beginning to think that you have seen anything I have seen, and so much more.
Click to expand...

Already watched.
I hated Matt Damon until I watched his act in Good Will Hunting.

I'm a fan of some rather exotic movies that reveal my quirky sense of humor. But, for movies with IMDB 6.0 or greater...

The Bicentennial Man (6.9) Robin Williams, Sam Neill, Oliver Platt (1999) 132 min. - Andrew (Robin Williams) is a robot who wants to become human. Over many decades, he learns enough about human behavior to realize he has fallen in love. Some humor, some thoughtful philosophy, some poignancy.

Victor, Victoria (7.6) Julie Andrews, Robert Preston, James Garner, Leslie Ann Warren (1982) 134 min. - Victoria Grant (Julie Andrews) is a singer in Paris during the 1930s depression, finds work in a cabaret that is gender-bending to say the least. Gangster "King" Marchand (James Garner) falls in love with Victoria but is confused by the circumstances of her employment. Incredibly funny.

Forbidden Planet (7.6) Leslie Nielsen, Walter Pidgeon, Anne Francis, Jack Kelly (1956) 98 min. - The crew of star cruiser C-57D journeys to Altair to rescue an overdue exploration party, but finds an incredible discovery awaits them. Notable because if you are Star Trek fan you will recognize where Gene Roddenberry got a LOT of his ideas. In the first 20 minutes or so of the film, you see no less than five different iconic scenes from one or the other of the Star Trek shows, but this was at least 9 years earlier.

Arsenic and Old Lace (8.0) Cary Grant, Raymond Massey, Peter Lorre (1944) 118 min. (B/W) - Mortimer Brewster (Cary Grant) just got married and checks in with the two old-maid aunts who raised him from childhood. He discovers family secrets that cause him to think he has gone insane. He is sure that everyone else already IS insane. Sounds grim, but it is actually funny and witty. A perfect example of what used to be called a "Screwball comedy." The first time I showed this movie to my wife, she laughed so hard I had to replay parts of it because her laughter drowned out the dialog.

The Last Starfighter (6.8) Lance Guest, Dan O'Herlihy, Robert Preston (1984) 101 min. - Alex Rogan (Lance Guest) lives in the middle of nowhere and has become an expert at a Star Fighter video game. But it wasn't a game, it was a trainer - and he passed the hidden test. Next thing he knows, he's the pilot of a space fighter craft with an alien navigator fighting a whole alien armada. This is a "guilty pleasure" movie most notable for it's special place in movies - the first feature-length live-action movie to have full-screen space scenes based solely on (early/primitive) CGI technology. Not necessarily to everyone's taste but historically significant.

Alita: Battle Angel (7.3) Rosa Salazar, Christoph Waltz, Jennifer Connelly, Mahershala Ali (2019) 122 min. - A cyborg (Rosa Salazar) is rescued from a scrap heap by Dr. Ido (Christoph Waltz) and reactivated by him, but she has no memory of her previous existence. She goes on a personal journey to discover what she can learn of her past. Incredible action sequences and special effects. However, this story originates from a Manga comic series so the plot line might not be to every taste. All I can say is that I was curious and was glad I watched it.

The Sixth Sense (8.1) Bruce Willis, Haley Joel Osment, Toni Colette (1999) 107 min. - Malcolm Crowe (Bruce Willis) is a child psychologist who meets Cole Sear (Haley Joel Osment). Cole claims to be able to see dead people, who greatly frighten him. Malcolm decides that he is really seeing "something" and persuades Cole to just listen to what the ghosts are trying to tell him. This might be one of the best performances I have ever seen by Bruce Willis and it is an absolutely stunning movie in its subtlety.

That is a small sampling of old and new films. Some of them might be old enough that you haven't seen or heard of them before.
A

Blue Velvet or anything David Lynch

D
Sorry We Missed You.

You could get Arrested if you had a spider in the bath!