What's a good look for the main site? (1 Viewer)

I am working on changing the look of the main part of the site. It is very dated (like me), and needs a refresh. So, if there are any websites out there that you think look good and the design might suit Access World, let me know. Also, if you have any ideas of content sections, or what should be on the home page, my ears are open.

The only thing that is holding me back from releasing the new site template is the GDPR compliant privacy policy I am working on. I bought an up-to-date one and it is so long and complicated, it is giving me a big headache filling it all in. Once I get it finalised, I will release the new home page. It is very simple but hopefully it will do the job.

Then I can look at adding more of the testimonials and making them look a bit better.

The current home page is a piece of shite. Blame me for that.

I'm struggling through the cookie policy/privacy policy document and not far from completion. It is taking me ages, trying to find bits of information here and there. Currently stuck on what cookies Google Adsense uses. This really is an onerous burden for small businesses. I wonder how the non-technical cope with it, especially those who just have a simple Wordpress blog up there.

Jon said:
I'm struggling through the cookie policy/privacy policy document and not far from completion. It is taking me ages, trying to find bits of information here and there. Currently stuck on what cookies Google Adsense uses. This really is an onerous burden for small businesses. I wonder how the non-technical cope with it, especially those who just have a simple Wordpress blog up there.
Click to expand...

I bet they don't to a large degree, especially the WordPress bloggers.
It became UK law years ago that Ltd companies had to display their registered address on their web sites. Huge numbers still don't.

I personally am not an advocate for all these privacy rules, although I know many will disagree with me. I think the burden to website owners is too great, and it just criminalises most of the small site owners. And I hate popups cookie notices too!

And @Minty, you are right, so many are breaking the law in all sorts of areas. I read somewhere that they think only 50% of sites will pass an audit, or something like that. They are making the burden of site ownership too costly, where you will eventually need to hire lawyers just to comply when running something simple. And most people can't afford that. It is like they fail to consider that aspect of it.

I admit I don't have any firm data in front of me on this, but I think generally we have Europe, et. al, to thank for the absolutely copious amounts of totally meaningless "this site uses cookies" (which everyone has known since 20 years ago) message. I remember when it first became trendy in the U.S., it was funny because it totally wasn't required here, but rumor had it that Europeans were doing it, and so soon you saw the notices start popping up even in the most ridiculous (far-removed from that law) places....like my child's 8th grade school's website. And surely politicians here in the U.S. jumped on the bandwagon quickly enough. What annoys me is that a lot of the Privacy Laws tend to be putting in place a whole bunch of policies that nobody except the politician [maybe], who wrote the bill....And the business, who has to comply, understands. I have never met or even personally heard of anyone who has taken advantage of pretty much any "consumer rights/access" stuff in those laws. (Who knows, perhaps on some very bored day in the future, when I suddenly wish to know precisely how Amazon or Walmart.com use cookies to track me, or want to know how they tie ads to my presence on a webpage, suddenly I'll be thrilled that there's a 2000-page legislation that saved us all from ...... [not knowing] (?)

You can tell I am also skeptical of the rewards vs. benefits. I totally agree that privacy laws are probably a great example of regulation gone - not sure if I would say Too Far, or just poorly and meaninglessly implemented, at great burden to all (except the consumer, who I am skeptical has any way of measuring benefit, or how much they even benefit) ...After all, a privacy policy isn't a privacy protection, it's just a written explanation of non-protection, and who actually reads a business's privacy policy and then says "Oh, glad I found this out - guess I won't do business here". Never heard of that either.

What would be really nice is if the creators/sellers of all of this boilerplate software (wordpress, even AWF's backend), were required to provide documents about how their technology interacts with any component covered by these pieces of legislation. It would be an automatic part and parcel of being the creator of the technology. That would be too logical!
Last edited: Aug 6, 2020

What I am struggling with is finding just a simple list of the cookies that Google Adsense uses, the filename, together with the purpose of each. I've searched Google using "Google Adsense cookie list" yet I still can't find one! Frustrating!

It might be their million dollar secret, held close to the vest.

I would have thought it would be easy to find since Adsense must be the most popular advertising platform out there.

I know next to nothing about that subject and don't envy your task ... Hope you find what you need.

I might launch the main site anyway and just update the cookie notice when I finally get the information. We are likely to be, on a continuum, more compliant than most sites.

Does this help at all? AdSense publishers were notified back in July that they would need to make changes to their websites to comply with the new EU user consent policy. The notification required that changes were in place by September 30th 2015. Despite the looming deadline, many publishers are yet to implement...

Unfortunately it doesn't help. I need to fill in this table: 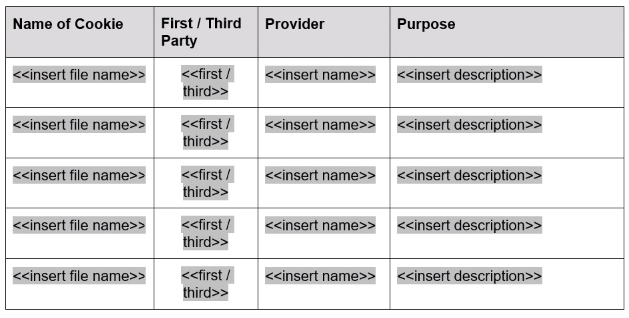 That is the data I need!

I've managed to get a privacy policy up. It is still missing the adsense cookie data. It seems that Google is not making it easy to find a list of cookies that they use for Adsense. This surprises me, since they are supposed to make everything transparent. In any case, I have most of the privacy policy complete. There were problems in converting if from Word to Wordpress, but I eventually found a plugin to help.

Edit: I've no idea why they put [ ] around everything. It is a bought legal document so I assume they know what they are doing!

Jon said:
Here it is: https://www.access-programmers.co.uk/privacy/

Edit: I've no idea why they put [ ] around everything. It is a bought legal document so I assume they know what they are doing!
Click to expand...

Aren't you meant to use one or the other of those options enclosed within [] ?

Possibly, although the options cover both instances! e.g. if I later hired someone, does that mean I am then an "us" rather than "me"?

I think your options would be singular?, as opposed to the likes of BT?

When does "Me" become "Us"? If it says me or us, then it covers both scenarios, at least that is how I read it.

I didn't read it fully, merely browsed over it to get the gist of it.? Just had another quick peek.
As you are the sole owner, I think it should be me, or I ? that is how I read it. I wonder what others think?

Resources section - what goes in it?

Clarification regarding the Site Owners role in banning

S
Help with subform datasheet view looks good(the way I designed); but the form view in my main form looks like a datasheet.
2 3