This was sparked by the following presentation given by Mark Rendle:

Code:
And Conway's game of life in APL:

That's just totally unreadable and how would you even type it in? You had to have an APL keyboard of course.

Moving on to INTERCAL, which was designed to simply poke fun at other programming languages. 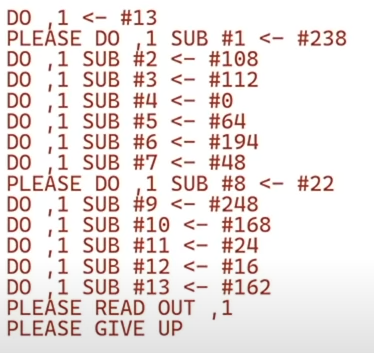 Notice the lines with PLEASE in them, if you didn't have enough of that word in your code, it would not compile due to programmer being too impolite. It's like a form of slavery to the compiler. To make matters worse, instead of GoTo statements you had to use Come From instead. The compiler was designed to drive up your CPU usage to 100% if you didn't add that last line "PLEASE GIVE UP" at the end.

Mark puts Visual Basic 3.0 on the list because at the time there was no object oriented coding in that version and the Data Access Layer was non-existent until VB4 came out.

The rest of the video shows Mark attempting to piece together an even worse programming language than INTERCAL. He called it BS. Have a look at it comment back here.

Probably should add LISP to that mix. The programmers of the day gave it the nickname "LISP - Lots of Insipid, Silly Parentheses" - because practically everything had to be enclosed parenthetically. Sometimes with multiple layers.

I recently ran across a very similar article (which actually may refer to this article), but then "lost" it so I couldn't post it.
L

reminded me of this from back in the day - http://www.toodarkpark.org/computers/humor/shoot-self-in-foot.html

At the risk of going too far afield, this reminds me of the days back in grad school, when we were forced to read insufferable text books for many course. A few of us came up with the notion that many of them were written solely to intimidate new students, and not to impart any real knowledge. The guiding principle of Academic Writing is that "I'm smarter than you and I'm proving it by writing something you can't understand."

Ah, but no, George. The guiding principle was "If I don't publish something else original then I had better publish a book that I can use in one of my courses and force students to buy it. I may not be smarter than you - but I can still give you a bad grade if you don't buy my book."

One of my (now deceased) committee professors did exactly that - and I even managed to contribute a chapter without realizing he was going to do what he did until it came out. Cheap-ass bastard didn't even give me a free copy.
G

LGDGlen said:
reminded me of this from back in the day - http://www.toodarkpark.org/computers/humor/shoot-self-in-foot.html
Click to expand...

They left out TCL and Universe SQL.

In Universe SQL it could be:
You pull the trigger WHERE your foot is in the target and blow a hole in both feet with one shot.

While I am here, see if you can get your head around this. The table name (more accurately, the VOCabulary entry for the data file) can include dots and underscores without requiring delimiters.