At least now the democrats can't say again that voting passport is difficult to get.
Click to expand...

They can and do lie every time they open their mouths. They are currently trying to redefine the term "infrastructure". The dictionary definition includes roads, bridges, power generation, power distribution (electric grid, pipelines), food production, food distribution, Things we use every day but don't "see" and can't live in a modern society without.
Biden was on his way this morning to give a speech in his home state of Pennsylvania and shortly before it started, a bridge in a nearby area collapsed. Injuring several but I think not killing anyone just to make a point.

But the "infrastructure" bill before Congress will not spend any money on any of those things. It's all about social issues.

One of Biden's campaign promises was to choose a black woman as his running mate. That's fine, he can choose whoever he wants because the person chosen may or may not affect the votes he gets in the election.

However, he also promised to nominate the first Black woman to the Supreme Court. That's a different matter. It isn't a personal choice as an "assistant" that the people also get to vote on, it is a life time appointment and is specifically forbidden by the anti-discrimination laws. You can't hire someone BECAUSE they are Black and/or a woman. You should be hiring people based on ability.

When leftists use "equity" to choose nominees, I ask how they pick their heart surgeon and their personal doctor and their lawyer. Do they choose because the doctor/lawyer checks some irrelevant boxes or because the doctor/lawyer is the best qualified to solve their problem. How about your airplane pilots. Do you want someone deaf and blind and gay with a Spanish surname? That checks a lot of boxes and planes do almost fly themselves these days but I'd rather have someone QUALIFIED flying the plane.
Last edited: Jan 28, 2022

oleronesoftwares said:
At least now the democrats can't say again that voting passport is difficult to get.
Click to expand...

oleronesoftwares said:
At least now the democrats can't say again that voting passport is difficult to get.
Click to expand...

The only way dims stay in power is by making YOU a victim. Without victims and hate for Americans it all falls apart along with their false narrative.

Pat Hartman said:
They can and do lie every time they open their mouths
Click to expand...

I think politicians irrespective of the party have a natural tendency to lie, in all it's the people that lose out.

And people will still fall for such again?

AccessBlaster said:
The only way dims stay in power is by making YOU a victim. Without victims and hate for Americans it all falls apart along with their false narrative
Click to expand...

If this is a repeated cycle, then citizens are not learning from history.

oleronesoftwares said:
And people will still fall for such again?
Click to expand...

So what do you think is the way forward? Doing the same thing, the same way, and expecting a different result is wrong.

oleronesoftwares said:
So what do you think is the way forward? Doing the same thing, the same way, and expecting a different result is wrong.
Click to expand...

I will answer the question. But, I hope that you are not delving into the endless question game, where you continually put forward questions, but offer no "solution" of your own, such as offering your suggestions on the "way forward".

Steve R. said:
I will answer the question. But, I hope that you are not delving into the endless question game
Click to expand...

No am not, i am based in Africa, and not a fan of any of the two main parties, just interested in humans doing to others what they wished to be done to them.

oleronesoftwares said:
No am not, i am based in Africa, and not a fan of any of the two main parties, just interested in humans doing to others what they wished to be done to them.
Click to expand...

Because i have relatives in USA and Europe, i try to follow what is happening there.
A

I agree with @Steve R. It would interesting to hear if you think your political system works and how it compares to other countries.
P

If this is a repeated cycle, then citizens are not learning from history.
Click to expand...

That is why the Democrats came up with the 1619 project which changes the founding of the US to that moment (a failed colony) and time rather than the more traditional Mayflower landing in Massachusetts in 1620. It also asserts that the colony relied on slave labor which is false. The people who came there as slaves were accepted as indentured servants (very common at the time) and earned their release in a few years. I think the earliest settlement in the US was in St. Augustine, Florida. But it was founded by the Spaniards so doesn't count.

We are also taking down statues of heroes like Teddy Roosevelt and putting up statues of criminals like George Floyd.
Here's an interesting article on a survey regarding the removal of the Roosevelt statue:
Americans oppose relocating a Theodore Roosevelt statue, when asked five different ways | YouGov
You have to go pretty far down the list of articles to get to this one because even DuckDuckGo has to prioritize a list somehow.
Last edited: Jan 30, 2022

AccessBlaster said:
I agree with @Steve R. It would interesting to hear if you think your political system works and how it compares to other countries
Click to expand...

I think @Steve R. is asking about the views being portrayed to those of us in Africa about happenings in USA.

Most of the views in my country Nigeria is from CNN, we don't have access to Fox News

oleronesoftwares said:
Most of the views in my country Nigeria is from CNN, we don't have access to Fox News
Click to expand...

That is unfortunate. I was hoping there might be some African pundits who would bring an African perspective as to what is happening in the US. Think of Talleyrand's observations of the US from the French perspective.

Steve R. said:
That is unfortunate. I was hoping there might be some African pundits who would bring an African perspective as to what is happening in the US
Click to expand...

Though I have my views that are not influenced by the media, I believe those views might hurt some persons' on this platform, so I will keep mute for now.
P

Sola,
Your opinion is your opinion and you are entitled to it. However, you are not entitled to your own facts and therein lies the problem. If you do not have access to news from various sources then it is hard to know what the facts of any situation are. It is very difficult to listen to or read news and pick out what is Opinion vs what is Fact. You have to know what words to look for and be very critical when there is an absence of details. For example, "all Republicans are white supremists". Is that a fact or is it an opinion? It is impossible to determine without some underlying examples. Just saying it doesn't make it so. I think all Republicans who hold elected office are feckless pieces of dog do do and I say it frequently but almost always with a reason attached. Either something they did that I thought was wrong or more frequently something they didn't do since Republicans are terrified of being called names by the left. So they can't object to the fact that the government is holding political prisoners from the Jan 6 riot that happened over a year ago. These people are being held without bail for the crime of trespassing and yet people who commit actual crimes using guns and physical violence are let out without bail almost immediately in cities like New York and Chicago. Hmm, "trespassing", "knocking a women down on the street and giving her a concussion", Which crime is worth more than a year in jail without bail?

I think you might find free news sites for Newsmax and OAN (One America News). They are more likely to include actual facts in their stories along with their opinions. It is a real shame that we can no longer separate opinion from news anymore. Not sure whatever happened to Who, What, Where, and When but that is what news stories used to contain. There was a time, long ago, when you could read a news story and not know the writers opinion. But not any more. Every article is full of purple words and the opinion of the writer is front and center as if we care what the writer thinks.. "Purple words" is an idiom so it probably makes no sense to the non-English speakers here. They are adjectives that almost always convey some negative connotation and are unnecessary in the sentence. They are included so that you KNOW the writers opinion of the subject. For example, whenever a writer who suffers from TDS writes about Trump's objections to the 2020 election, they always say "unfounded" objection. They never say just "objection". Unfounded is their opinion and it is in fact not true since all the court cases that have proceeded have actually found substantial irregularities with the 2020 election. Substantial enough to have changed the outcome. The cases that did not proceed were not dismissed due to lack of evidence, the judges refused to even look at the evidence, lest they have to let the case move forward, and they dismissed the case on "standing". Things like, you needed to bring the case before the election or you needed to bring it after the election or you were not personally damaged so you can't bring the case, etc.
A

“You can't make an omelet without breaking a few eggs.”

That explains why I am constantly walking on eggshells, but that's a different story.

The wheels of justice, unfortunately grind along at a snails pace. Today, there was another news tidbit where the Durham investigation has acknowledge that the Hillary campaign paid to have operatives infiltrate the Trump administration to illegally spy on him. While this preceded the 2020 election, it demonstrates that the Democrats are exceptionally corrupt with their campaigning and implies that the Democrats continued to use dirty tricks to manipulate the 2020 elections for their benefit. Consequently, there is another evidencary "nail" that implies the 2020 election results are questionable and would validate an "Election Do-Over!!!" if it were allowed. 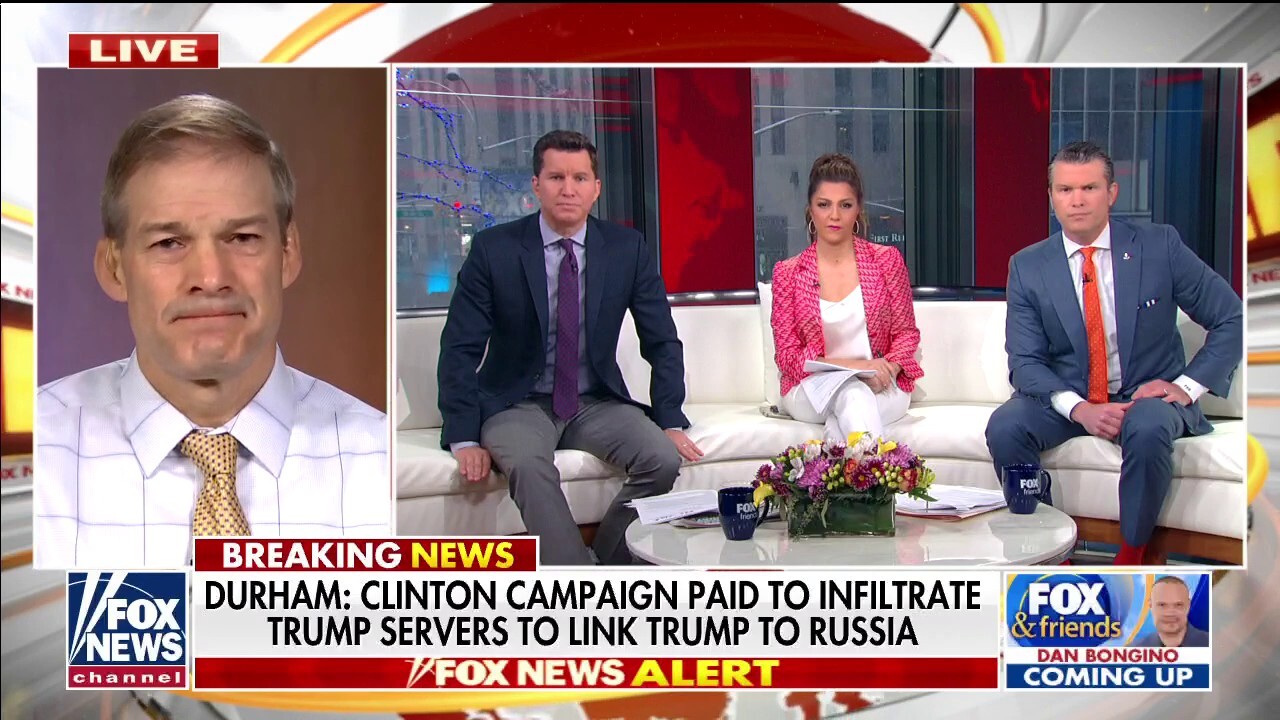 Rep. Jim Jordan, R-Ohio, weighs in on new evidence from the Durham investigation that the Clinton campaign paid to spy on and link Russia to President Trump.

Special counsel John Durham alleged in a court filing Saturday that the Clinton campaign paid a tech company to hack servers in former President Donald Trump’s residences and the White House to gather derogatory information on him during the 2016 campaign and while he was president.