Tony needs a hug...or a beer. Hell, somebody give him both!

NauticalGent said:
Tony needs a hug...or a beer. Hell, somebody give him both!
Click to expand...

You can bet your ass it won't be me. Not after the way he's treated me.
I

Galaxiom said:
Have you ever considered the notions behind certain clothing and behaviour being attributed to particular genders. It is actually quite arbitrary as a result of historical accidents rather than anything intrinsic.
Click to expand...

I do agree with you on that.
But having said that, a man who dresses as the opposite gender by today's standards (as arbitrary, meaningless & temporary as those might be), isn't doing so for no reason. I wouldn't think, typically
I

Harrybrigham said:
Bob Hope summed it all up with a joke many years ago. "I'm not leaving California because of the homosexuality. I'm going before they make it compulsory."
Click to expand...

Wow....what a succinct way of putting it. Of putting the way many people feel, and it is NOT because they "hate gays", nor anything of the sort, no matter how many times the left tries to say it is. It's the shoving it down our throat..

Isaac said:
It's the shoving it down our throat..
Click to expand...

That conjures up an image I wish to forget....

conception_native_0123 said:
Being rude is the worst possible thing in this world, even after being gay.
Click to expand...

NauticalGent said:
Tony needs a hug...or a beer. Hell, somebody give him both!
Click to expand...

Is Tony paying for the beer?

The_Doc_Man said:
In the USA right now we have a show on the CW network that is an adaptation of the Batman character from the comics. (And actually, was a legit character in some of the "golden-age" Batman comics.) The Batwoman show is abysmal and the lead character is lesbian. They show mentally deranged people, gay people, and thugs, all sorts of aberrant behavior. I watch it now and then in the same sense that someone would be unable to look away from a train wreck... morbid fascination. If the show became any more "woke" it would have to reach the level of explicit lesbian sex. A few weeks ago, one of the "villains of the woke ... 'scuse me... week" was Poison Ivy, whose girlfriend was trying to persuade her to not be evil. I must admit I watch the show in the hopes that someone in the network will come to their senses. However, so far, no joy. In fact, the CW network was up for sale but I didn't want it so passed on buying it. (Also, didn't have the required cash handy, but I would have passed on it even if I WERE that wealthy.)
Click to expand...

Through films is one of the surest ways of passing ideologies to the public.

Isaac said:
But having said that, a man who dresses as the opposite gender by today's standards
Click to expand...

How about the Scots?
H

oleronesoftwares said:
Do you think that will happen?
Click to expand...

Society is (Group of people with the highest influencers of thought), this can always be changed.

oleronesoftwares said:
this can always be changed.
Click to expand...

Yes it might not change soon, but efforts can be made to prepare a change in the narrative for the future generation.

More info on the Bill:- 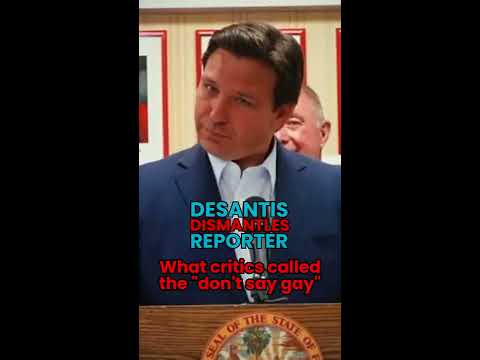 DeSantis DISMANTLES False Narrative Reporter. There have been people protesting this bill in Florida that haven't even read the bill and are being influenced...

At time index 5:20 minutes Jordan talks about provision for a racial overseer.

At time index 5:20 minutes Jordan talks about provision for a racial overseer.
Click to expand...

I like that quote by Jordan Peterson (@32:22), "Conservatives should be ashamed of themselves for being so god damned dumb." That can be expanded to include anyone who doesn't see what they (government/educational authority) are trying to do to the very fabric of our culture of being free pursuers of happiness and blatant disregard for our God given rights. And here in the US, disregard for the Constitution.
You must log in or register to reply here.