Pat Hartman said:
No, that was dumb but we all know that people running for election say things that make their supporters happy or that will convince non-supporters to vote for them (wait'll you see all the about faces Biden takes). That doesn't excuse the chants. I'm pretty sure he didn't start them. They would have been started by someone in the crowd but he should have shut them down.

I was referring to the comment he made where he promised to NOT investigate Hilary once he took office. I was bummed because I think she should have been prosecuted for playing fast and loose with secure emails among other things. Other people have gone to jail for lesser crimes but not a "Clinton". She's Teflon just like Bill. But I agreed with Trump's decision because taking down Hil would inevitably lead to the Clinton Foundation and that would take down Bill and reflect very badly on Obama and at the time, I was willing to go for peace rather than retribution. NOT THIS TIME.

The problem of course is that time is of the essence and judges with TDS are squashing motions to preserve evidence!!!!! Why was it necessary to wipe the voting machines this weekend? The answer is obvious, they couldn't take the chance of anyone seeing the code. If they were innocent, there would have been no corruption to find. Destruction of evidence is itself evidence of a crime. It won't undue the election but those people need to go to jail. Maybe they were paid to take one for the team. Maybe Biden will pardon them next year.
Click to expand...

President Trump on Friday voiced approval for supporters who shouted "lock her up" about 2016 Democratic presidential nominee Hillary Clinton. 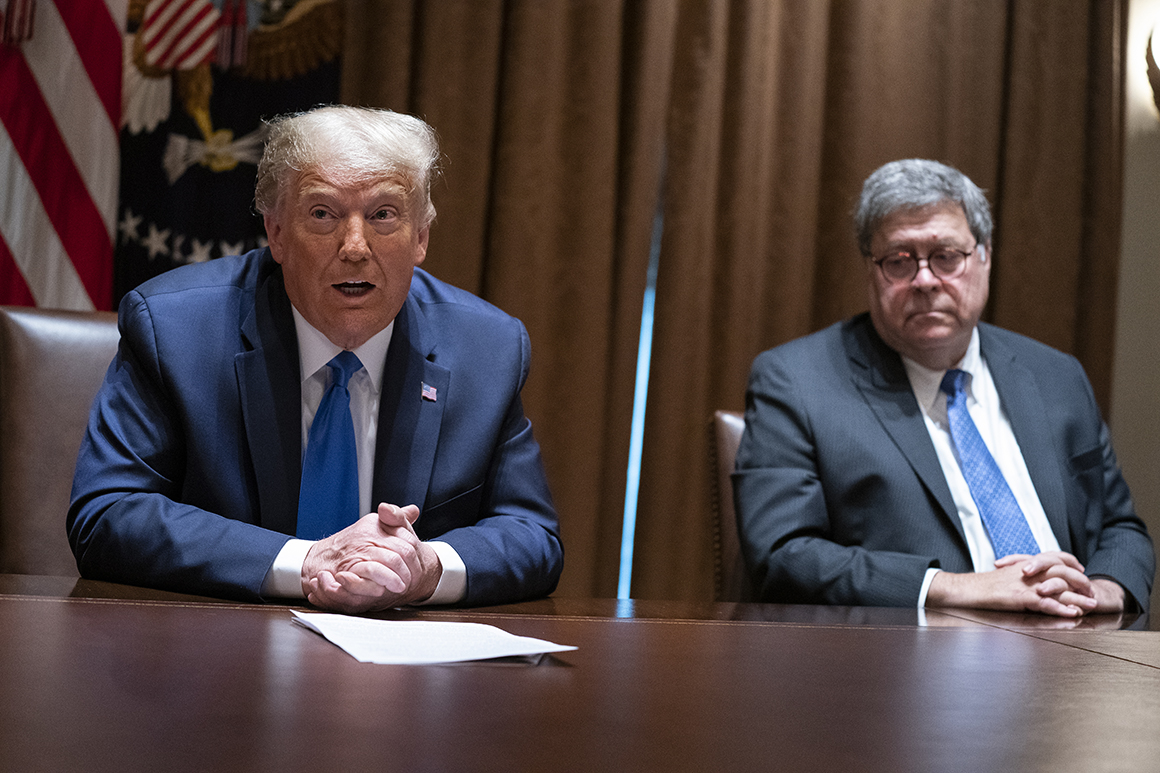 ‘Where are all of the arrests?’: Trump demands Barr lock up his foes

The day-long run of tweets and retweets marked the most frantic stretch of Trump’s public activity since he left Walter Reed.

Then-White House counsel Don McGahn reportedly had to explain to the president he had no authority to order that.
www.thedailybeast.com 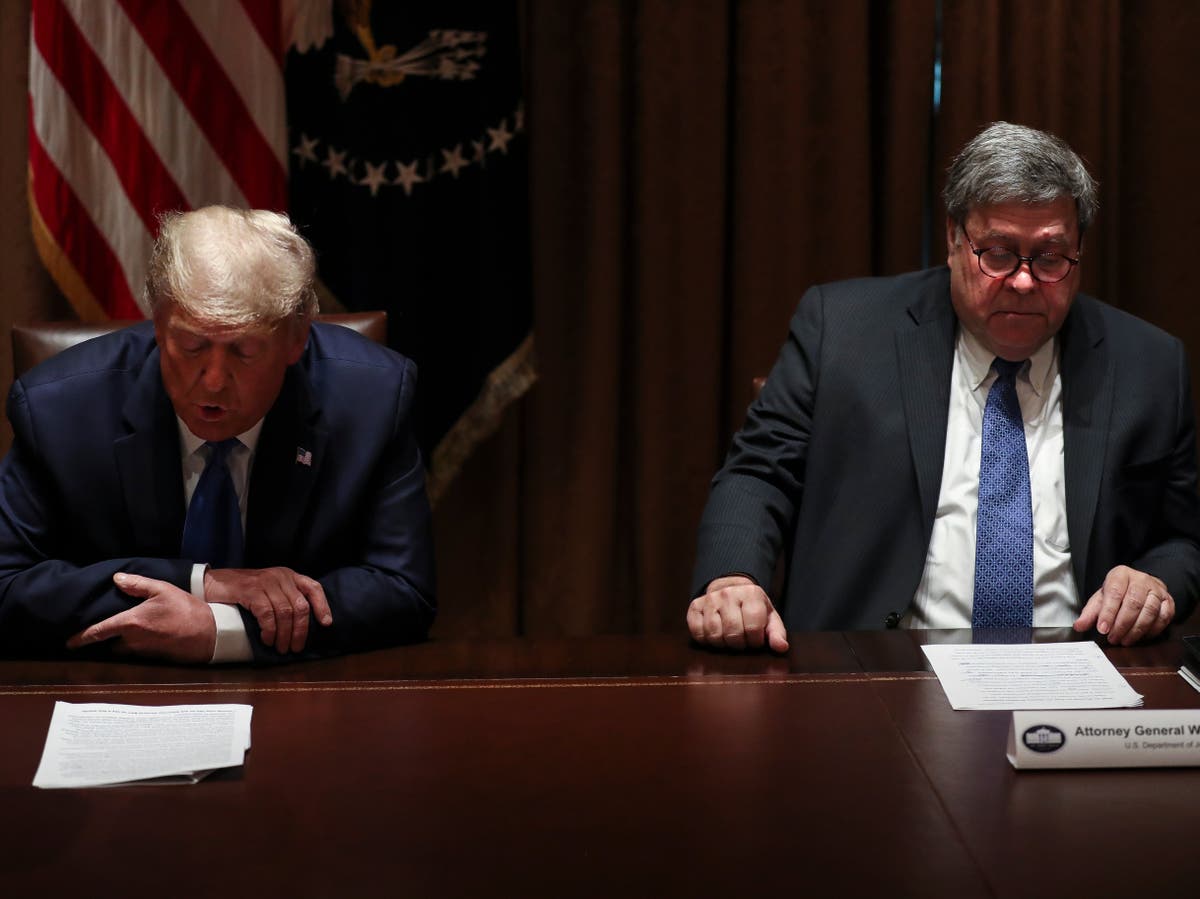 And of course the ironic part is

The problem of course is that time is of the essence and judges with TDS are squashing motions to preserve evidence!!!!!
Click to expand...

You really need to keep up with the news. Tune in friday.
A 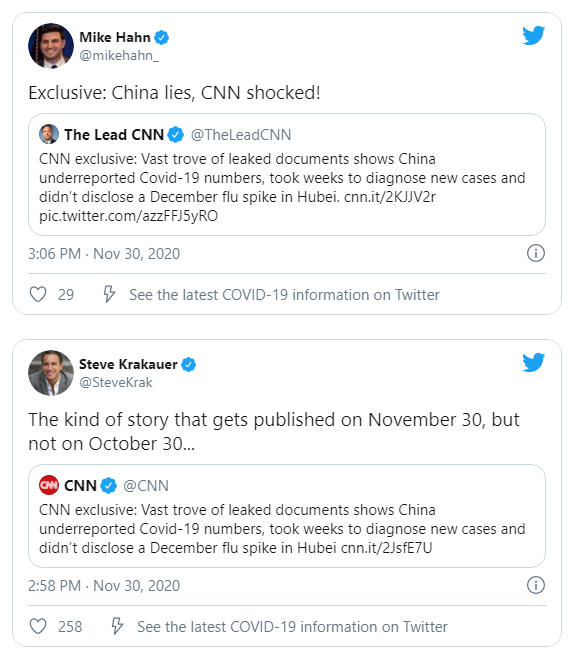 Another story that should have been published on October 30th instead of November 30th. Tucker Carlson had a long segment on keeping the schools open. He provided a clip of Trump speaking to that in July. Over the subsequent months the complicit media denigrated Trump for advocating that the schools be kept open. Today Carlson showed a bunch of clips on people demanding that the schools be re-opened.
P

In 2016 Trump specifically said that he would not pursue prosecution of Clinton. However by 2020, he's ready to prosecute Obama if he can and I don't blame him. 4 years of 24/7 hatred and obstruction is more than anyone should have to bear.

Don McGahn should lose his law license. Who would want a lawyer who talks about his client the way he did. So much for trust. I'm sure you've said things in private to people you trusted that would make you look bad if it were interpreted as negatively as possible on the front page of some newspaper.

But, it was OK for Obama to have his IRS persecute conservative charities and it was OK for Obama to have the FBI tap the phones of conservative reporters. I think he even jailed one. Trump says stupid stuff but in case you haven't noticed, he doesn't actually do the stuff he talks about. Why he says stupid stuff is beyond me but I don't much care what he says. I actually care about what he does.

Pat Hartman said:
In 2016 Trump specifically said that he would not pursue prosecution of Clinton.
Click to expand...

Please show me a link.
A

I ordered some shoe cleaning supplies from Walmart online to be delivered to the store. They sent me an e-mail back stating "Don't forget to bring a valid government-issued ID"

Wow, Walmart is 100% more secure then our voting system.

BTW doesn't that disenfranchise millions of Walmart shoppers and probably racist to boot?
I

See? it's easy to get from 1 to 6. You just have to accept that I refuse to undertake any self improvement exercise that might solve the problem!
P

I didn't include the Fox version because that would be "fake news".

The problem the left has always had with Trump is that they take him literally but not seriously. The man is NOT a politician. He doesn't know he's not to speak in a stream of consciousness. He doesn't know that he's supposed to tell PC lies to hide what he actually thinks.

Trump thinks that Clinton deserves to be prosecuted for her security lapses and possibly for her use of the Clinton Foundation to collect money from foreign nationals while she was Secretary of State and I agree. His decision to not pursue the prosecution was purely political but he believes today that she should have been prosecuted for her crimes. Keep in mind that Obama told Hilary in no uncertain terms that keeping the CF active while she was Secretary of State was a no go so she agreed to shut it down. Clinton can't be prosecuted for Benghazi but that was what tipped the scale for the people who didn't care about the careless security and personal enrichment from selling out her country using the CF. Benghazi just proved she was a bad choice to take the midnight phone call. American lives were not her top priority. And then she lied to cover the whole thing up but that didn't work.

The personal server was intended to cover up her interactions regarding the CF. She knew that if she used a government account, it would be subject to FOIA regulations. At least with the private server, she'd have a chance to delete anything incriminating before "complying" with any request. She also was pretty sure that she wouldn't be blindsided by an over inquisitive DOJ or FBI because she was part of the in-crowd.
Last edited: Dec 1, 2020

I am glad to see your pro law and order though since the veil on the trump dynasty is about to get lifted.

Are you up to date on AG Barrs announcement today?

The real question is where is the Biden "olive branch"? After four years of unrelentless lambasting Trump as an illegitimate president, it is up to the Democrats to put an end to this divisiveness. Biden called for "unity", "healing", and and saving "soul of America". Instead of putting out the olive branch, some Democrats are actually calling for criminal and adverse civil actions against Republicans. One aspect of this is the creation of an "enemies list". Just demonstrates that Biden and company are simply blowing smoke and will continue their four year hideous effort of unrelenting lambasting of Republicans.
A

Now you love Barr All over the map.
A

Hopefully it takes a long time before the left has any creditability with law-enforcement.

AccessBlaster said:
Now you love Barr All over the map.
Click to expand...

No, i think he's corrupt actually.

I think if laws were broken in the last 4 years (regardless of party) they should see the light of day, as should any of the state laws broken.

What makes you think healing doesn't include punishing wrongs?

Playing word manipulation games. Those who would be persecuted by Democrats would have a right to defend themselves by obstructing Democratic inspired witch-hunts. So when one advocates "healing", I would assume that implies a degree of forgivenss so that the cycle of hate does not fester and continue. Proposing "enemy lists" just keeps those hatreds alive and keeps the cycle of divisiveness ongoing.

moke123 said:
I think if laws were broken in the last 4 years (regardless of party) they should see the light of day, as should any of the state laws broken.
Click to expand...

That must mean that all those pushing FISA abuse in 2016 and the Russia hoax should all be prosecuted.

Attorney General William P. Barr on Tuesday announced that he had given special counsel status to the prosecutor investigating the origins of the Russia collusion probe, assuring the investigation can’t be squashed by presumptive President-elect Joseph R. Biden.
Click to expand...

The federal court's opinion stated that the government could access certain information not protected by attorney-client privilege, pointing to possible ...

The Department of Justice (DOJ) is investigating a potentially criminal scheme involving paying a bribe to people either in or affiliated with the White House in exchange for an unknown person receiving a presidential pardon, according to

The heavily redacted documents do not name the individuals potentially involved.

The federal court's opinion stated that the government could access certain information not protected by attorney-client privilege, pointing to possible ...

Hard to believe anyone would site Huffington Post as any sort of reliable source. They are just below tabloid and slightly above toilet tissue.
Last edited: Dec 2, 2020

Take your pick. It's pretty much everywhere.

Heavily redacted documents did not show which individuals are under investigation in connection to the alleged scheme.

AccessBlaster said:
Hard to believe anyone would site Huffington Post as any sort of reliable source. They are just below tabloid and slightly above toilet tissue.
Click to expand...

Probably below toilet tissue. There is a local Safeway brand I really like.
A

Isaac said:
Probably below toilet tissue. There is a local Safeway brand I really like.
Click to expand...

The latest toilet tissue scare didn't seem to materialize at least not in my neighborhood. Has anyone else noticed the latest covid-19 surge seems a little weak? The scary videos of hospitals with fuzzy victims is starting to look like stock footage to me. Almost like a Hollywood 3 camera shoot equipped with scary music and crazy chyrons.

I'm not saying it isn't true, but we have to rely on disinformation coming from CNN and other propaganda sources.
Last edited: Dec 2, 2020
You must log in or register to reply here.

Will the Democratic Coalition Start to Unravel?
2

How is it that the (Scientific) Polls, Once Again Got it Wrong!!

Turley, Confirming the Legitimacy of the Votes Cast is NOT 'Delegitimizing Democracy'