How does Access World compare to the competition? (1 Viewer)

There are lies, damn lies and statistics!

Some of you may wonder why a competing website appears to have large numbers of guests and juicy numbers of online members at any one time, when compared to here, despite getting half the traffic. Well, I have the answer for you.

This is the setting I have in the back-end:

Anyone who is inactive in a 15 minute period is classed as offline. Comparing that with our nearest competitor, they use 60 minutes. So, if I look at a snapshot at this point in time, they have 28 members online while we have 21. It looks like they are busier, right? So what happens when I do this: 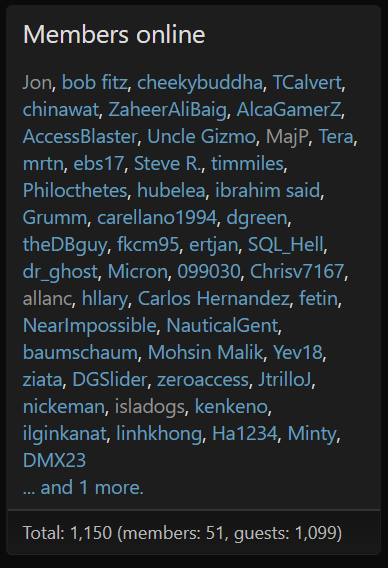 If we level the playing field, you can see how we really compare.

Before the recent changes, guest counts here were often 2,000+. Yet they have plummeted to, at this moment in time, 303. Why the disparity? Well, the old software was vulnerable to hackers, who want to do SQL injection attempts, break into the site and steal your passwords. The vast majority of those "Guests" were in fact bots trying to hack the site. They knew the older vBulletin 3.8 software was end-of-life and leaky. I made lots of back-end tweaks to help reduce the risks, but they don't know that so keep trying to hack. If we take say 2,500+ guests - 300 real guests, we are left with 2,200+ hack attempts in any 15 minute period. That is a lot of hacking!! Since our new software is patched against all known exploits, there is no point in trying to hack. There are no known exploits. You only have to go to the hacker forums to see tutorials on how to hack vBulletin 3.8. It is quite scary really!

The guest count when I equalised the stats timeout period was 1,449 at our nearest competitors, and 1,009 here, despite them getting half the traffic. If we look at the ratios and pretend they have the same amount of traffic as us, they would get roughly 2,900 guests compared to our 1,009. Assuming parity of guest ratios, that means 1,891 extra guests are unaccounted for on their older software platform, every hour. That amounts to 680,760 extra unaccounted for "guests" every year, given equal traffic. Now I don't know for sure the real cause for why they have more unaccounted for "guests" than us. I will leave that up to you to decide. But if they are hack attempts, it takes only one of those to get through and break the vault. Then, the data gets spilled. Just remember to always update your passwords regularly.

I hope the above helped give a clearer picture of Access Worlds real standing regarding traffic and security, without being led astray by each site using a different statistics time period. If you want to be at a site that is fast, secure and has the most Access visitors, you know where to come!
Last edited: Feb 19, 2020

I've just updated the section starting, "The guest count when I equalised..." since the picture was not clearly explained by me. I recommending having another quick look and the situation might look a little different!
M

Some sites set there timeout high just to look like they have a larger active member base.

One of the things I notice on my site is every now and again I get 3 or 4 registration attempts which never turn into members.

Some sites set there timeout high just to look like they have a larger active member base.
Click to expand...

I didn't want to bring it up first, because it would seem like I am bashing my neighbours. But you are absolutely right. Some set the timeout ridiculously high.
M

I'm curious to know some things.
1) is the only reason a site would set the timeout high just to make it look like there's a large pool of logged on users?
2) If I've read a post then open Access and start playing with code/design to assist with an issue, then let the dog out, then back in, then grab a beer (you get the picture) and I'm gone for longer than the timeout, it sounds like I'm shown as being off line. Do I get dropped from the "Users who are viewing this thread"? Does any of that matter to anyone who starts with the thread after me?

1. I can not be 100% sure why someone would set the timeout high, but I strongly suspect it is to make the place look busy so people come play. The default timeout period for vBulletin and Xenforo was 15 minutes.
2. My understanding is that zero activity for 15 minutes leads to you dropping from the users online stats. The "Users who are viewing this thread" data is an addon made by a third-party, and I do not know what method they have adopted. There might be a setting in the backend for the session timeout period but I haven't looked.

Just look at this thread and what the first post said: https://www.vbulletin.org/forum/showthread.php?t=315292

I have a newer forum, and to help it look a bit more busy I have increased the Session Timeout to help the "Who's Online" look a bit more appealing to new or prospective members.
Click to expand...

It is about manipulating perception.
Last edited: Feb 19, 2020

I give you guys all this data so you can make informed decisions. Sunlight is the best disinfectant!
M

Jon said:
My understanding is that zero activity for 15 minutes leads to you dropping from the users online stats.
Click to expand...

Maybe I can figure that out, in which case I'll let you know. However, just trying to see the status of that might be enough to make me "active" again.

I don't think it can check that your eyeballs are on it, unless you are using one of those Samsung phones of course.

Micron said:
However, just trying to see the status
Click to expand...

Just checked my timeout it's 15 as well

Why did I start this thread? It wasn't to bash the competition. Both places have great value. But I felt it was unfair for another site to be perceived to be busier just because of how they have decided to set their timeout settings, especially when we are twice as busy.

Followed in 2nd place by copious amounts of alcohol. And since there ARE places where the sun don't shine, the only way to get them disinfected is to apply the alcohol internally.

The Big get bigger, the Small get smaller