One of my unexpectedly favorite classes in college was The history of Jazz. We had some requirement and it seemed like it would be the least shitty class out of our choices. Turned out the professor was a close friend and student of Eubie Blake and could play the piano unlike anyone i'd ever seen. It was like going to a concert 3 times a week. He was so good most of the class also took his history of ragtime the following semester.

I am not big on music, but I did see Johnny Cash live twice.

I had a chance to go to the Playboy Jazz festival sometime in the late 70's. I gave my tickets to my older sister, been kicking myself ever since. Too young to really appreciate what I gave away.

I've told this story before, Moke, but since you mentioned Eubie Blake, I saw him on the Johnny Carson "Tonight Show" once, on the occasion of his 100th birthday. Out he came, walking without cane or walker but perhaps a bit bent over. His voice was definitely an "old man" voice, but he sounded alert and pretty much aware of what was going on. Then Johnny asked him, "If you knew that you were going to live to age 100, what might you have done differently?" Without a moment's hesitation, he replied, "I i'd a known I would live this long, I'd have taken better care of myself."

Needless to say, that got a big cheer out of the audience and Johnny had to laugh.

In their interview he admitted that it was too hard for him to perform publicly any more but that he did still pick out a tune or two when he had the chance. I've only heard recordings but I'm pretty sure he forget more music than I've ever known. 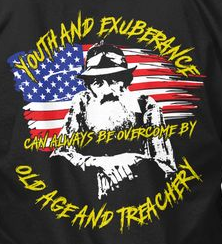 Not surprised Michelle Obama said this, I am however surprised that a very rare fact check was made by the AP.

except towards the end of the article :

The Obama administration separated migrant children from families under certain limited circumstances, like when the child’s safety appeared at risk or when the parent had a serious criminal history.

But family separations as a matter of routine came about because of Trump’s “zero tolerance” enforcement policy, which he eventually suspended because of the uproar. Obama had no such policy.
Click to expand...

At least they amit who built them. It is an election year so they want to appear centrist in their reporting.

Anyone watching NOS4A2 on amc

Can you fit a whole game into a QR code?

AccessBlaster said:
Not surprised Michelle Obama said this, I am however surprised that a very rare fact check was made by the AP.
Click to expand...

Didn't Trump offer a deal on the dreamers, but the dems refused it for political reasons.

On the immigration topic I veer a bit less conservative than on other topics. We need to remember that these people do what they do out of DESPERATION. They are a Dad who watches his little boy and girl unable to have the basic necessities, a Mom who watches their babies not get proper medical treatment. People with COVID are turned away from hospitals unless they have money for bribes, because there is only a small fraction of room compared to the people with a need. There is public healthcare known as the "seguro sociál", and the inside of those facilities looks more like a concrete jail in Nairobi than a hospital where you might get well. It is somewhat known that going in is a cross between a tiny chance at getting help vs. a death sentence. There are not enough jobs for everyone; an inlaw of mine works 40 hours a week for a tiny hotel that pays her about $30 per month. She can't say "No" because there is nothing else. If they stopped paying her completely she would keep working 40 hours a week because that earns her the right to remain in the paying position, should the virus end and things go back to "normal"--total exploitation & abuse. BTW, she has a college degree. Another inlaw of mine has a full bachelor's Accounting degree + license, and he's been looking for jobs, including those that pay a few dollars a week for cleaning, with no luck for a year. He's tried to move to bigger cities but they come with very expensive apartments and heavy crime and hasn't had any luck anyway - and if he did, the disposable income would probably be similar to the options in the smaller city in which he lives. In the state where they live, an entire generation of working-age males have been gunned down by cartel violence, often having nothing to do with the victim. Girls disappear and bodies are only occasionally found. Older people get diseases that they have no $$ hope of treating and lay at home until they die...Usually the cause of death is chaulked up to "la gripa" - basically the flu, nobody really knows, probably was something trivial if it were here..

Another of my inlaws just finished all her studies to be a medical doctor and is currently in residency. She makes pennies--very close to zero--and is required to be a front line COVID worker 7 days a week if she wants the position. Their new president is very "progressive" (liberal), the first thing he did is decree to lower the pay of doctors and require them to undergo a long period of helping rural villages for free in VERY dangerous places - Ranchos, so to speak, which my niece completed without losing her life. I've wondered (out loud) to her why she doesn't start the process of coming here--Doctors here make a LOT ... It comes down to she really doesn't want to, she's lived 28 years watching the suffering of her city and the idea of staying to be helpful where it's needed is more appealing to her...A heart I can hardly imagine, as an American. (In Mexico teachers often make more than doctors). She already got COVID (I believe--a respiratory problem that lasted a month), but we don't know, because a test was not available for her.

Then these people watch an America where we let in a billion Asians and Indians and it is so much safer and more secure, and people generally have the basics. A lot of Hispanics from poorer countries have college degrees but for some reason the visas seem to go to the ones I mentioned.

I'm not naive; I realize that one country can only hold "so many" people. At some point the doors to the house have to close for the sake of the family. But given that our border situation is porous and for whatever reason they DO get here, I'd recommend a healthy dose of compassion go along with any policy making in that regard.

There are groups clamoring for attention in the US that I have less sympathy for by a long shot. People with the same opportunities everyone else has who have simply achieved less for a variety of reasons--most of them having to do with personal choice. Then there are people outside the US who were just born in the wrong place. I was born in a "right" place and can take no credit for that. I try to remember this when it comes to immigration policy discussions.
M

@AccessBlaster , have seen the kid before; he's almost unbelievable. The guy who made the other video is something else too - just not in a good way.

Isaac said:
I realize that one country can only hold "so many" people.
Click to expand...

Micron said:
@AccessBlaster The guy who made the other video is something else too - just not in a good way.
Click to expand...

What's not to like? His eyes are like a young Sylvester Stallone, and a face like Sacha Baron Cohen plus he really does slap that bass

Whats up with the kids in England?

Is Alex Jones of InfoWars a danger to society, or just entertainment?