it will not work without VBA, because it will use Timer Event to display text in Normal/Contrast color (to make it appear blinking).
try using Conditional Format to change the Background/Foreground color on your Condition. but it will never blink.

As a side note, I caution against blinking (flashing) as for some people it triggers physical reactions. I tend to just make the border turn red and push them back to said control if they try to go to another record including a new one.

Hadn't thought about it, but Gina is right. Flashing - if bright enough, fast enough, or big enough (or any combination) can trigger latent epilepsy.

For the color codes that we use to color forms, reports, controls, etc., there is no "flashing" bit because the display modes that have such abilities are unsuitable for use with Access. More specifically, there is no display mode used by Windows NT or later that I recall that has a flasher ability. IF you could somehow uncover the old DOS-level hardware display modes that recognized flasher bits, you would have something like 16 colors and character graphics only. Ever since the advent of WinNT, those display modes have been highly restricted. But it doesn't matter if Windows allowed it because Access displays cannot work with those display modes anyway. Those modes don't have the pixel-level graphics capabilities that Access requires. That window mode that gives you up to 16 million colors does not include a flasher bit among the abilities of that display mode. That means "no hardware support."

So the traditional way to do this is to program the timer event to alternate between two colors every half-second or full second or some other time. But that requires VBA, which you say is blocked for your machine.

So to condense that into a simple answer:

I want to make [Code1] txtbox control to be blinked (Flashing) if the value is more than 0, but it dose work with me can you help me plz
Click to expand...

No. No path exists from where you are to where you want to be.

well i am wrong, it can be done after all.
warning!!! consult your doctor before testing or if symptoms persist.

arnelgp said:
well i am wrong, it can be done after all.
warning!!! consult your doctor before testing or if symptoms persist.
Click to expand...

change the first If to:

also you add an ElseIf to the first If, so that the text will be black/on white background when the value is 0. 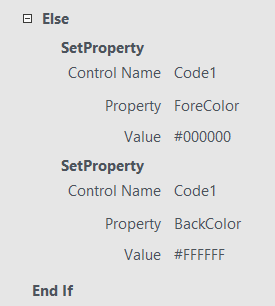 S
Solved Determine SetTempVar On / Off