I wrote the following email routine. The emails are sent and received perfectly without any issues. I'm using the sendTLS method for encryption. However, there is so much conflicting information on the web about its effectiveness. Some suggest using the UseSSL method instead. Regardless of which method I use there is no visible evidence that anything in encrypted. They seem to come through as regular emails. Does anyone know whether my code actually encrypts the emails?

I am far from expert on this, but I tend to doubt that CDO will encrypt anything. If you pre-encrypt the text body before building the message and your recipient knows how to decrypt it by extracting the text body only, that might work. But generally you need something like Outlook, which has encryption built-in as an option for encryption, because "true" encryption these days requires a certificate interaction.

I think this is true (but won't put money on it) that CDO simply implements SMTP almost directly. The last time I tried this was about 2015 or 2016, so if something has changed, I would not know it. But back then, I couldn't make it happen without doing a LOT of complex programming myself, including making system calls to several Windows APIs regarding encryption. And some of those APIs are very complex indeed. I didn't have the time and couldn't guarantee results on the other end either.

Check out this article from one of our members, @sonic8. Good luck!

An extensive article describing how to send emails from within an Access application with VBA and the CDO Library.

Thanks DM and NG. I am very familiar with that article. I used it as a reference when writing my code. However, I find it to be unclear at times. And I can't see any evidence that my emails are encrypted. Makes me feel uncomfortable.
DC - I can't use Outlook because of those annoying messages that I reference at the top of my code. That's why I'm using CDO.

I don't *think* they are encrypted.?
When I was last working we needed to send emails encrypted and had to use a third party extension.?

We had been using standard SSL for both POP and SMTP always ?

Even if it did, shouldn't you be using that standard ports for SSL and not 25 ?

I have used CDO for all emails from Access for over a decade including the use of both SSL & TLS.
I also have this working with authentication needed for GMail.
See CDO EMail Tester - Mendip Data Systems

Consider this 'parallel' situation:
When you encrypt an Access database using a password and then link to its tables using the password, the tables appear unencrypted.
The process is 'seamless' and you would have no direct evidence that any encryption existed in the file.
However in you open an encrypted database using a text editor such as Notepad, you will see the effects of encryption i..e. you just see gobbledegook.

The same is true for emails. When these are sent using encryption, the email application handles the process natively so you can read the received message without any intervention needed

So to confirm whether SSL / TLS encrypts an email sent using CDO you would need to intercept the email and try to read it using an external application e.g. Notepad again. I'll leave that to you...
Last edited: Feb 11, 2021

Depending on what level of registry changes you can make,

If you use Microsoft Outlook and installed at least an add-in, third-party component or any other mail-related software I bet you are familiar with either the 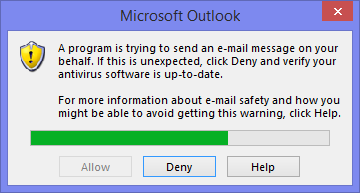 Discusses an issue in which you receive an error when you send an email message from another program, such as Microsoft Excel. Provides a resolution.
docs.microsoft.com

This might help you with the Outlook issue
I

I'm going to present a very "layman's" view. I'm not a CDO expert at all, and have only used it a few times.

But isn't the entire encryption question, one handled by the server where the message is dropped to? If Gmail encrypts messages, and you use CDO to call Gmail, then the message will be encrypted? At least that is a guess that I have. You send a message to an smtp, it picks it up and runs with it. It does whatever it normally does with it. No?

For example, if I write a function to send email using Outlook, and give someone else the function code, they would not properly ask Does your function encrypt the email? I would say "it uses Outlook - ask your Exchange admins"

Thus, CDO neither encrypts nor doesn't encrypt messages. It is just a caller of the one who may encrypt. My guess.

TheSearcher said:
Does anyone know whether my code actually encrypts the emails?
Click to expand...

nobody knows. and nobody looks into the hood and look at the "raw" data
being passed or received.

you just take their word by faith.

Stated another way, I know for an absolute fact that it is possible to use VBA to tell Outlook to encrypt a mail message, and it works. You have to do a web search for the correct activation sequence, but once you find the sequence it is maybe one or two instructions to get to the right place to set the "Encrypt" flag. For the version of CDO that I had available, there was no such flag. I looked.

Isaac, you are correct that if you use something else to do the sending, at least from the 2015 perspective, you didn't encrypt anything, your utility did it (or didn't). Some of the articles I saw here refer to using a definitional trick to trigger SSL encryption at the network level, not the utility level. That is a possible solution, I suppose, if encryption is required.

One thing, though, is that at least with Outlook you would know that the message arrived "cleartext" or "encrypted" because the Outlook interface tells you that much. It knows it was encrypted because the encryption "handshake" standard passes a copy of your public key (because the sending side looks that up for encrypted messages). If it was encrypted at the source utility, then the destination utility knows that. If it was encrypted by the network, however, ArnelGP is absolutely correct, because the transport layer at the receiving end is the layer that gets decrypted and the receiving utility doesn't see it. It only sees what the network layer passed to the utility.

@Gismo
I received a notification mail where you requested the info in the link I gave in post #6.
Your post has apparently been deleted but in case you still want it, see CDO EMail Tester | Access World Forums (access-programmers.co.uk).
The most recent version 1908 is in post #5 of that thread.
You must log in or register to reply here.