Golfers being aggressive to ramblers (1 Viewer)

Uncle Gizmo said:
It's usually about money. I'm wondering if there long-term plan is to remove common rights so that it becomes private land. That opens the door to the possibility of selling part, or even all of the land for development... You might want to look into the legal structure of the golf course and find out who would benefit from such a windfall. Even if that's not true, it would make a very nice "Fake News" story of your own, to counter theirs!
Click to expand...

They cannot remove the common rights because its built into the contract. They tried to sell the golf club car park area, which has beautiful views of the South Downs. You can see for miles. It was for a care home and they had a deal for £1.5M to sell the land. But the sale was refused. The rules state that if you try to sell common land, it has to be replaced by an area of equal size with equal qualities. But they tried it on with a boggy bit of land with no views. So the authorities said they cannot do that deal.

The local golf club is a stain on Crowborough! The bad attitude towards the public is terrible. Numerous disingenuous attempts to try to change the Commons status and to fool the public that they have to walk on the public footpaths.

Let us be clear about this. It is a commons first, golf course second. It was a public common before. They built a golf course on the common. It remains a common.
G

It never should have been sold to the golf club because golf endangers people who use it for its original purpose.

I don't actually buy the golfers argument about danger to the public being a legitimate excuse to not to ramble there. They bring that up as a justification for ramblers to stay off the golf course. But if it is so dangerous, why are they on there themselves? I took this photo a few weeks ago: 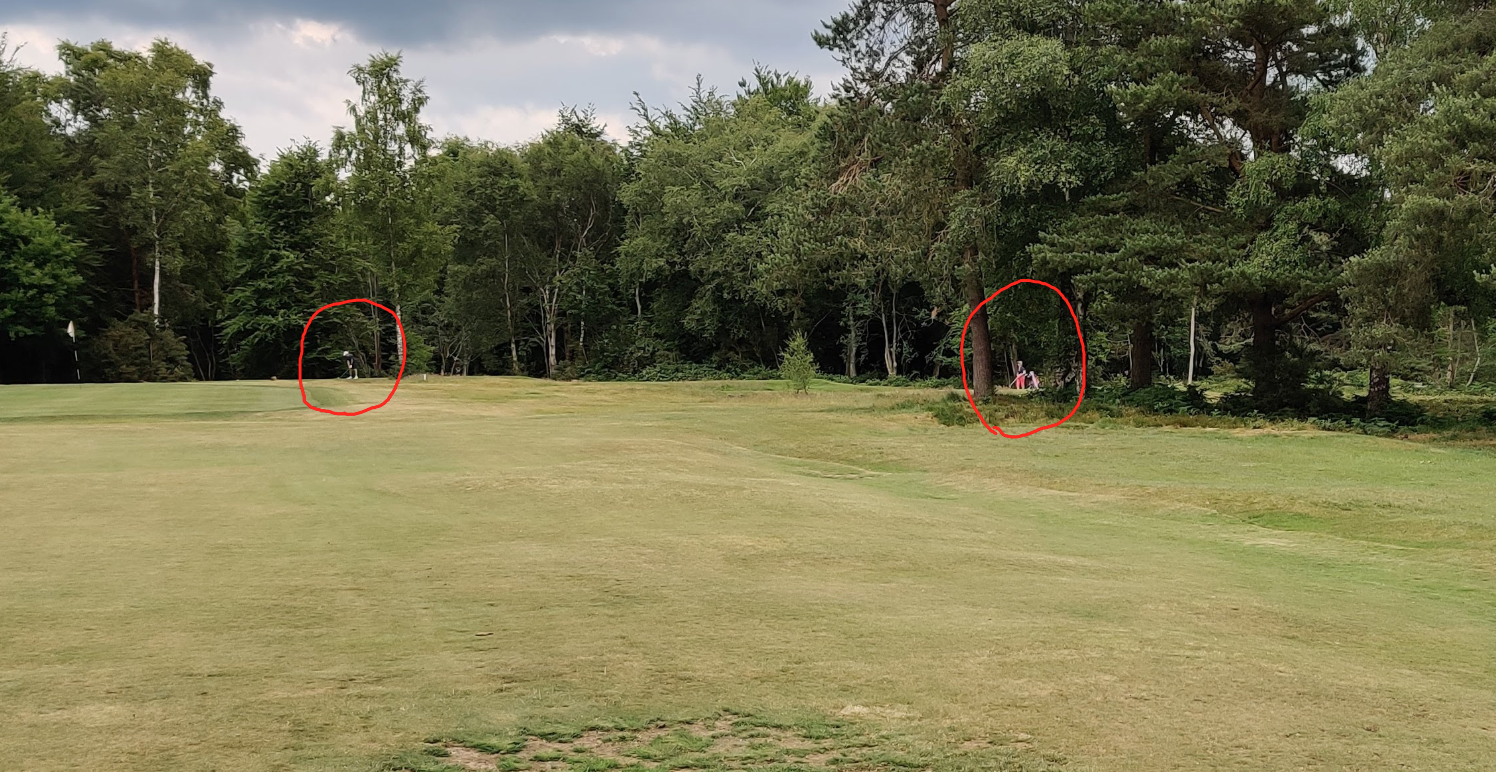 The guy on the left is taking his shot from the mens teeing area. The guy on the right is in the seniors teeing area. He has to hit the shot past that guy and practically over his head. So you tell me, do you think the senior, probably in his 70's, can get out of the way in time for the guy taking his shot on the left? I see this sort of thing constantly on the golf course.

Here is another one I took:

The guys on the left have their back to the guy taking the shot on the previous hole. He doesn't have to slice that ball much for it to hit those guys.

So, why is it dangerous for a rambler but not for the golfers?

Jon said:
So, why is it dangerous for a rambler but not for the golfers?
Click to expand...

Many golf courses have public footpaths across them, and as you point out, the members themselves are also at risk.

@Jon That's not dangerous, it's part of the fun!
Got to get some adrenalin rush, otherwise it would be a bit dull.

The golf club has this propaganda up on a website they created about Crowborough Commons: https://www.crowboroughcommon.org/legal_documents

The rights of the public are now governed by the Countryside and Rights of Way Act 2000 (CROW). However, Schedule 1 – Excepted Land for Purposes of Part 1 – 7, shows that Land used for the purposes of a golf course, racecourse or aerodrome are excepted from “the right to roam” (for obvious Health and Safety reasons).
Click to expand...

But the CROW act does not apply and they know this.

Here is what they claim: 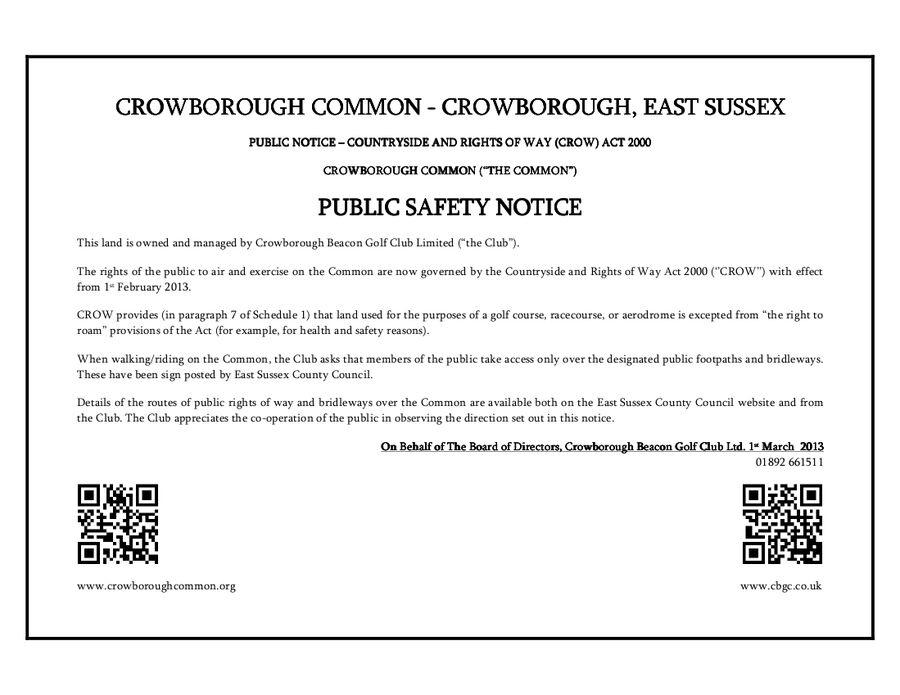 But you can also see on this article that the CROW act had not been applied from 1st February 2013, as they claim.

It is understood that ESCC will implement the CROW act in 2019 under which, as confirmed by DEFRA, that part of the land utilised for playing golf, initially calculated to be just over 60% of the land owned by the Golf Club, will be “excepted” from public access other than by approved rights of way. It is therefore the wish of the Golf Club that the remaining part of the land which is not utilised for the playing of golf is made available to the community for air and exercise through approved rights of way and new permissive routes.
Click to expand...

Edit: This shows their own history book that confirms the rights of the public: http://crowboroughcommon.blogspot.com/p/blog-page_28.html
Last edited: Jun 23, 2020

When did the club purchase the land and where did they play before they acquired the land?

They bought it about 100 years ago. I have no idea about where they played before they bought the land.

It was formed in 1895. There was a rudimentary course (possibly 9 holes at that time?)
So they have undergone various updates to the course and clubhouse since then according to the website.

Recapping this thread, I've no idea what happened to my post 19, doesn't appear to make sense, and the only thing that occurs to me as I started posting one thing and went back to it later so I've got two unrelated thoughts in the same post.

I realised nobody noticed, probably because most of my posts are senseless!
M

Uncle Gizmo said:
I realised nobody noticed,
Click to expand...

Don't bet on that. I don't chime in every time I have a thought - especially about the political stuff.

We had a "lost" mountain bike rider last night, it took us 3 shouts and a jog across the fairway to get him to understand the direction he needed to head in to avoid getting totally stuck with no exit at the furthest corner of the course.

We all had a laugh about it, as did he.
You must log in or register to reply here.

What ever happened to Courtesy & Good Humour?
2

Why can't we speak propa Engish no more?