Is America on the brink of Civl War? (1 Viewer)

I don't mean anything rude by this, rather, I just honestly would be interested in learning more about your perspective, (as a Californian).
Your several comments almost indicate that the dearth of a "good" (or "better") California is caused (at least in some big part) by people from other parts of the US, coming to California.
My impression, and I think at least very many other people's impression from across the non-CA U.S., is just the opposite: That California has caused its own undesirable aspects, directly by virtue of its own policies, laws, and culture.

(And I admit that "undesirable aspects" is totally subjective, and precisely what one person feels is awful, another person might treasure as wonderful).
Are you saying there is a widespread perception within CA natives, that the infamous things about California are actually the result of people from other states moving in ? Not having heard this before I'm curious.
I mean, I've heard Californian's refer in a very generic way to the annoyance of visitors - like people in San Diego saying how they feel about weekend visitors from Phoenix over-running the place and all.
But the ways we think of CA being distinctly California-ish, especially those touted as less positive, I haven't heard much of a feeling that they come from elsewhere, I always thought they were the result of die-hard Californians.
A

Issac I don't consider your question rude at all. I just want the same thing you want. Most of California's issues are internal liberal based, we are our own worst enemy.

While most of you wish to contain California within it's borders, most natives wish you never came. Sound familiar?
I

AccessBlaster said:
While most of you wish to contain California within it's borders, most natives wish you never came. Sound familiar?
Click to expand...

I don't really understand. If you mean 'familiar' as in, don't I feel the same way about Arizona? Well no... it seems quite different.

My motive for not wanting CA to come to AZ is because AZ was already pretty good - solidly conservative, traditional lifestyle still allowed, mostly free. I don't want CA coming to AZ because it changes AZ 'away' from something good. Whereas in CA it's different....if you are more traditional or conservative, and live in CA, it seems that you might actually want that outside influence? Or I might be totally and hopelessly misunderstanding...sorry.
A

Isaac said:
if you are more traditional or conservative, and live in CA, it seems that you might actually want that outside influence?
Click to expand...

Only knuckleheads from the other 49 states are coming. But if we can unload some of these folks on our neighbors it's a win win right? Cause only conservatives are leaving CA.... Isn't that what you and Paul are fearing like minded conservatives changing your politics.
I

I just don't want incoming liberals which changes AZ's make-up. But I suppose to be true to that principle, if I were living in a more liberal state, I'd welcome newcomers as long as they came from more conservative states.

We want you to come spend money,

AccessBlaster said:
Cause only conservatives are leaving CA.... Isn't that what you and Paul are fearing like minded conservatives changing your politics.
Click to expand...

Not in my case; conservatives would be welcome! We had a relatively conservative state that is being changed by liberals moving from CA (among many other factors I'm sure). If you look at a county voting map, you see the result. Most people moving to the state move to one of the 2 larger cities, Reno or Las Vegas. Those are the blue counties. I've seen a similar pattern in other states: big cities blue, rest of the state red. By county, most of the country voted red. 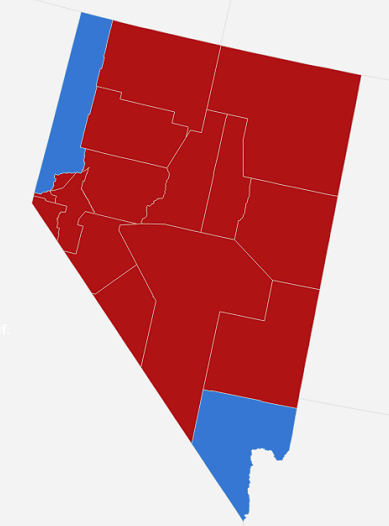 pbaldy said:
Not in my case; conservatives would be welcome! We had a relatively conservative state that is being changed by liberals moving from CA
Click to expand...

We used to live in Ely, NV. Sad to see Nevada going "blue". We now live in NC and the trend continues with the large urban areas of Raleigh, Durham, and Charlotte turning the state "blue".
A

Are you saying the Liberals are leaving CA? I was under the impression conservatives have been fleeing since the 80-90's. You have the Mecca of Liberalism in CA why would you leave?
P

For a mind blowing view of the US, take a look at the county level map of the results of the 2016 election. It is massively red. Middle America is conservative. The liberals congregate on the coasts and in some interior large cities. This is what kept the Democrats from winning the Electoral vote and is exactly why the Electoral College was adopted. The Democrats think of the heartland as fly-over country and they think those people don't count. Arizona is almost lost and the southern tip of Texas where the large cities are, may as well be part of Mexico. 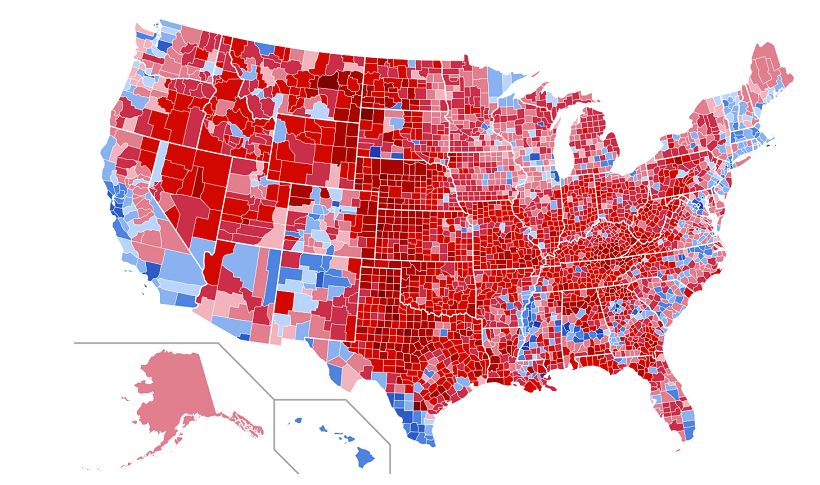 AccessBlaster said:
Are you saying the Liberals are leaving CA? I was under the impression conservatives have been fleeing since the 80-90's. You have the Mecca of Liberalism in CA why would you leave?
Click to expand...

Probably liberals and conservatives alike, but I don't really know. I simply point out that the states they move to become more liberal. Why leave? Very high cost of housing/living, traffic, crime, taxes. Of the states that CA people move to, 3 of the top 4 have no income tax. AZ's is a third of CA. Then they come here and want their goodies so they vote liberal.
A

Paul, they love everything you just listed. They voted for it, can you see the dilemma?
I

AccessBlaster said:
Are you saying the Liberals are leaving CA? I was under the impression conservatives have been fleeing since the 80-90's. You have the Mecca of Liberalism in CA why would you leave?
Click to expand...

I never even thought that deeply about it. I just assumed anyone from there is unavoidably tainted LOL
A

Isaac said:
I never even thought that deeply about it. I just assumed anyone from there is unavoidably tainted LOL
Click to expand...

Actually you think about it every time we come and displace your housing markets. I mean lets get real, it was never about liberals vs conservatives.

no kidding!? you're a blue dude!? that's sad. wait a minute...blue is donkey, red is elephant, right? if that is true, I've never understood why competent tech workers love democrats so much. Don't they realize that they're essentially causing their own destruction if they do that!? that's just stupid. like I've said so many times, you can't stop a force of millions coming for you to burn down your house. the police force is not THAT strong. the only choice you've got to keep the ugly people who are corporate fallout, away from you and your family, is to EDUCATE them and be nice about it. SORRY!

Jon said:
Democrat mayors saying all is ok until the protesters march to their homes and then they suddenly change their minds.
Click to expand...

well DUH! they're STUPID. they're unintelligent. they're angry at greedy corporations. they hate republicans for being good salespeople. they hate other republicans for taking advantage of the weak minded folks and selling them shit they don't need to get rich. have I left anything out?

They marched on Portlands Mayor yesterday, hours after he said the protests were peaceful. He is trying to side with the kids to be cool. They invaded his building where he lives in a condo. The police refused to go there after calls from neighbours.

Jon said:
They marched on Portlands Mayor yesterday, hours after he said the protests were peaceful. He is trying to side with the kids to be cool. They invaded his building where he lives in a condo. The police refused to go there after calls from neighbours.
Click to expand...

well that's no surprise Jon. and he is siding with the kids? you mean just like the adults of the world manipulating kids into learning computer science because they have run out of energy and are scared shitless that there aren't enough intelligent people left in the world to fund the stock market in the future? YEAH. hows that for brutal truth? but then again, it's only their own fault. =(

by the way, I walked by the cop shop in my town last night on my way home. the building barracaded off and all the cops are standing out there. the college kids are at it again, the good old BLM. now that they're back in school, the liberalism is once again out of control. but then again, aren't all college towns seriously left leaning? maybe they wouldn't be if the colleges didn't take advantage of youngs minds by promising them the world? YEAH. but then again, who can stop that? colleges have never taught anything of value, and they probably won't either. the PHDs teaching the course are too smart. they're too busy writing books.
P

The mayor of Chicago who refused Trump's offer of help to stop the looting in Chicago has armed guards at her house. It's OK for your store to be looted and burned. It's OK for you be accosted on the street. But SHE is important. She told us that when a couple of months ago she justified her new haircut when all the salons were closed because she is a public figure. She gets armed guards and haircuts. You get persecuted if you stand in front of your home with guns to keep the rioters who just broke down the gates to your community from looting your house.

Ron Paul and his wife were attacked on the street outside the White House on Thursday when they left the convention. They're alive today because there happened to be two policemen nearby. The mayor of DC sent all the police away even though they could see trouble developing.

WHAT IS WRONG WITH THIS PICTURE????? WHY are real Democrats allowing it to happen??? Do they actually think the mob will go away if Trump is not reelected? The mob is here to stay. The Marxists on the left HATE America. They want a revolution and they intend to have it. Just listen to them.

Pat Hartman said:
The Marxists on the left HATE America. They want a revolution and they intend to have it. Just listen to them.
Click to expand...

I've said this on LinkedIn a million times and I'll say it here. I will NEVER have a need for a gun. and people think I'm nuts. WRONG. I just know how this sick ass place works, and I understand the criminals too, although I don't interact with them. I just find it unfortunate that they don't realize the capitalism way of life as something that could do them well if they only knew how to leverage it. But alas, they cannot. So, the anomaly of life goes on....
You must log in or register to reply here.