I have an existing query of transactions where fuel has been received by any particular airline for any given date.
An airline can receive multiple fuel transactions per day.
I need to find the SUM of fuel received for each airline; only for the very last day they received it, within the given time period.

I can pull the last transaction date for each airline using the Last function. (see table below for example; though I need to make sure this only happens for values in the received column.)
The problem I'm having is trying to get the correct GallonsReceived for each airline (group) on only the last date they received fuel for that particular timeframe.

Example in the attached photos:
For testing, I'm running the query for dates between 12/01/20 through 12/31/20.
On 12/31/20, there happens to be only one received transaction per airline.
The other photo shows the last date of each airline had a transaction. (though I need to make sure this only happens for values in the received column).

Example db is attached. Thanks for your help! 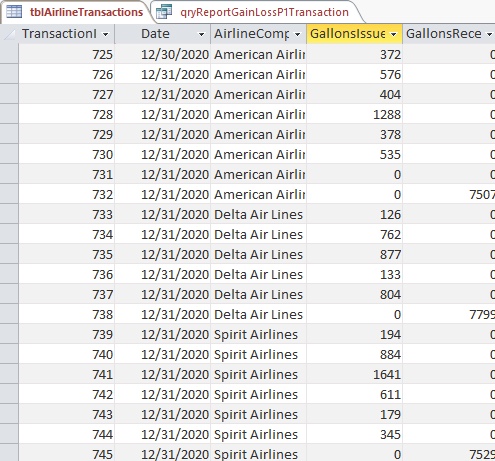 I think you would need Max() not Last for the transaction date ?

Now Q2, join the t.Transactions table with Q2 on Date and Airline.
now sum your fuel.

I managed it as

First, as I said in the prior post, GallonsReceived and GallonsIssued should not be seperate fields, they should be in just a Quantity field with negative numbers denoting Issued and positive numbers denoting Received. You're building on a poor structure that will bite you.

As Gasman said--you should use MAX not LAST. LAST is a horrible function in Access and doesn't operate in the manner people think it does. qryLastTransaction should be this SQL

Your current qryTransactions is a bad query because you GROUP BY in and and could be omiting records that should be included in the final total.

1. I removed the lookup combo box from AirlineLookup
2. I did two new queries qryGTHLastDate, qryGTHResult
3. The first query finds the highest date. The second gives the results.

Out of interest, I see all the system tables are unhidden. Do you use them? I have never once used a system table.

thanks for everyone's thoughts and suggestions. Not sure why i was having such an issue with this. In the end, i just started over with a bunch of smaller queries; i was trying to make it harder than it was for some reason
You must log in or register to reply here.

C
Solved multi page report, bottom of the page take the date of the last record of that page