this thread: (2) Solved - Possible to change text formatting through VBA? | Access World Forums (access-programmers.co.uk)
lead to to create this sample dataase.
Again, the code is not mine and I made a Link back to the original webite (see modTranslate).
I am not sure how much text can be translated. It's for you to find out.
You are responsible to debug, if there are errors.
I used the "original" code (using Excel automation).
If you can translate the excel function to pure VBA, then
we can incorporate it so we can discard Excel automation totally.
"encodeURL" is easy, there are lots of example in the net.

What is missing? audio translation.

Happy translating to all.

Thanks for finding this code @arnelgp.
I've often wondered whether it was possible to incorporate Google Translate into Access. This could be very useful

I've made one addition to the code to reinstate any apostrophes in the translated text e.g. C'est, aujhourd'hui 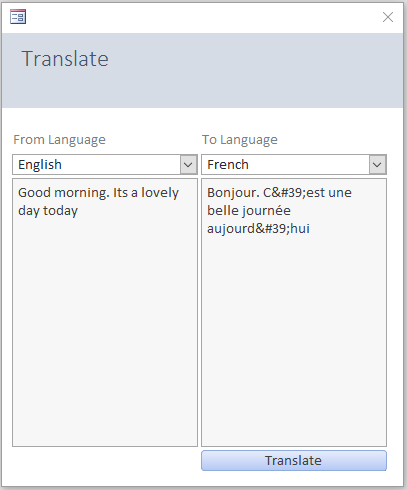 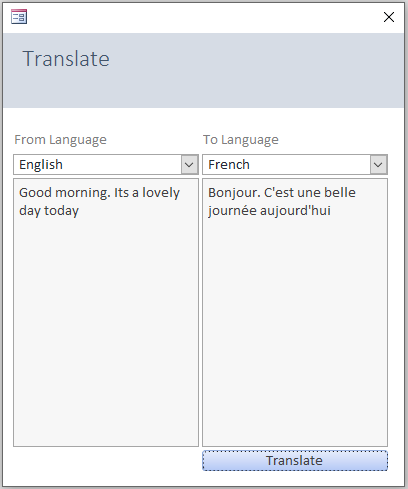 This just requires one extra line at the end of the Translate function:

Rich (BB code):
In principle, it should be simple to add audio translate.
However, I don't know how well it would work in practice unless you have a 'dedicated voice' for the translated language

thanks Isla.
btw, you need Internet connection to use Translate,
just as you would use Google Translate.

How can I URL encode a string in Excel VBA?

Is there a built-in way to URL encode a string in Excel VBA or do I need to hand roll this functionality?

Hi again
I did wonder whether other unwanted characters would turn up. Unfortunately neither my v2 nor your v3 handle quotation marks correctly.
For example (original on left, fixed version on right) 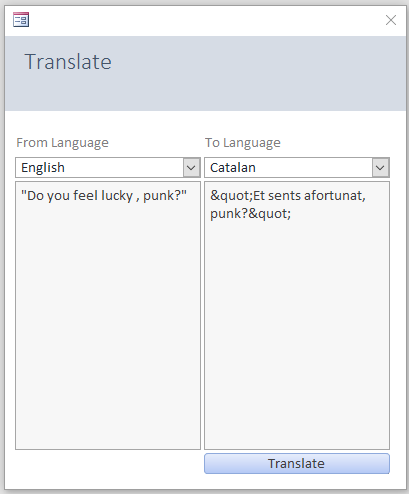 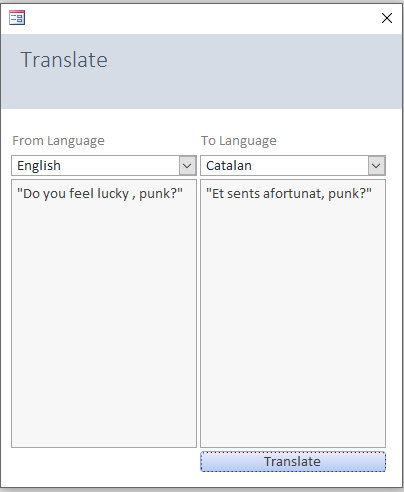 I've handled that by adding another replace line

Rich (BB code):
You may prefer to modify your CleanString function.

However, I've tried translating various phrases into languages using different character sets including Georgian, Tamil, Urdu & Telugu
All worked perfectly in my modified v2
So I'm just wondering what other unwanted characters apart from single/double quotes you have come across that need cleaning.
Last edited: Aug 28, 2021

incorporating change on "&quote;"
still using Excel though.
i cannot make the getHTTP to work.
it does not display "foreign" characters correctly.
will only work with Excel 2013 and up.

i've found another site that does not use Excel totally.
and it does not need the CleanString() function?
make more test. hopefully this is the final version.

Thanks
Version 5 seems to work perfectly in my tests. It also no longer has the initial delay experienced on each first use of the Excel version.

I've added reverse translate and copy to clipboard in my copy and intend to test the use of audio (text to speech) in the next few days.
Of course, voices that are suitable for e.g. European languages cannot read other character sets such as Chinese and Arabic.
So it will probably only be a partial implementation at this stage.

arnelgp said:
I am not sure how much text can be translated
Click to expand...

In addition, the following items are included:
a) code to check for an Internet connection when the form is loaded
b) reverse translate - useful for checking accuracy of Google translate and for translating into additional languages
c) copy text to clipboard
d) character count (including spaces etc) - tests indicate a limit of around 9800 characters can be translated - more than as @Nixversteher suggested.

The selected text is exported to a VB script file (Text2Speech.vbs in the program folder) which is then 'executed' i.e. read aloud in the selected voice

For the best results, install additional voices from text to speech settings
If no voice is available for the selected language, the text is spoken in the default language:

As a test, I installed voices for all available languages. There are a total of 75 voices in 48 languages.
For details, see Appendix A: Supported languages and voices (microsoft.com)

Voices 8, 9, 12, 13, 14, 15 can't be used for TTS in Access as the character set cannot be read
As a result, languages such as Chinese, Japanese or Russian aren't exported to the VBS file

I would be very interested if anyone can explain how to make use of all additional voices which can be installed
Other feedback would be welcomed.
For more details, see my separate thread: Translate & Speak | Access World Forums (access-programmers.co.uk)

NOTE:
I didn't use the code provided by @Nixversteher as its fairly similar to that in @arnelgp's v5.
However that code helped explain why the maximum URL length in Internet Explorer is 2083 characters.
IE is still used in the current Access web browser control.
A new browser control based on Chromium Edge will be released in the near future and, amongst other benefits, this will have a far larger character limit for URLs

That's right, the url can now be much longer than the 20xx characters I mentioned. But I think the free version of Google Translator only accepts up to 5000 characters of text.

I've checked and all the text is included in the translated version. So Google Translate isn't limited to 5000 characters

In any case, I'm not sure how your added code in v6A would work.


Code:
You've defined the string variable s & your Replace line is obviously intended to increase the max length as stated
However, it seems you don't then use s subsequently. Am I missing something?

UPDATE
Just found issues in the GglTranslate function with 4 characters (&, +, %, #) which are also used in URLs.
All are obvious with hindsight
The '+' is ignored and any text after & including '&' or '#' is omitted. Using a % results in all spaces becoming %20 as well

For now, I've done a quick work round replacing those 4 characters with very unlikely character strings (at least unlikely in English)
I have also added code to handle line returns correctly


Rich (BB code):
EDIT: I have just found out that the limit is 9800 characters. If you exceed that, there is no output.
Interestingly, the character limit if you type / paste text directly into Google Translate is just 500!

yes, should have been:

Code:
again, i am not going into "voice" translation since not all language can be voice-translate, specially arabic.
let the users add that on their own language.

and yes, post another thread, this is supposed to be my sample database thread and you keep showing up grabbing the limelight.

The issues I mentioned in posts #13 & #14 apply to the Google translation code.
They are nothing to do with the text to speech code

NOTE :
I've just created a new Sample Databases thread: Translate & Speak | Access World Forums (access-programmers.co.uk)
I have edited my posts above so as to avoid further distractions from your work
Last edited: Sep 1, 2021

so whether you are using old xp os, voice is available to you.

so whether you are using old xp os, voice is available to you.
Click to expand...

An early version of text to speech with one voice (Microsoft Sam) was built in to Windows XP
How do I... Configure Text-to-Speech in Microsoft Windows XP - TechRepublic

A couple of Windows 10 Voices (Mark & Eva) for anyone that can make use of them..
Just unzip and Double Click to invoke the registry entry...

I
Suggest a good TRANSLATION app ?