An open letter to Adam/vba_php (1 Viewer)

Since we are doing this mundane coding crap all day long, why not entertain ourselves with other interesting activities?
Click to expand...

Therein lies the difference between us. To me it was not crap. It had purpose, it had direction, it had value, and it was like solving a great big puzzle. At the end of the day, I was mentally tired but at the same time, exhilarated by successes - because I had quite a few successes on a weekly basis. If you think your job is mundane and crap, you are in the wrong profession. If you don't get an algorasm from time to time, you are missing out.

You keep on kvetching (don't worry, it's a good Yiddish word) about AI and how bad it is and so on. But here is a tidbit for you. In the mid-1950s, the advent of IBM data processing machines revolutionized the business world. Do you know why? Because prior to electronic data processing (EDP), the way that you got accounting stuff done was on an adding machine or a Friden comptometer (an electric-and-gear based multi-function adding machine.) Computations took hours even for simple bank account balancing. The advent of EDP meant that those menial jobs for data clerks could be changed to other positions because the computer could do the mindless totaling and counting both more accurately and faster. It was estimated that before 1960 we had reached an inflection point where, if all computers suddenly failed, even though paper trails for everything might well have existed, every bank in every modern country in the world would have collapsed - because there were not enough people in the world to become the data clerks needed for business to proceed at a meaningful pace. Notice I didn't say "trained people." Not enough PEOPLE PERIOD (based on the man-hours it took to do tasks manually multiplied by the number of tasks to be done.)

Two references for you regarding that era:

In the movie Bridge on the River Kwai, one of the members of the commando team was a bank clerk who added up columns of figures that were being added up by other clerks before him and after him in processing sequence. I.e. he was a figures checker. He was employed in a room full of such people and the bank kept multiple rooms of such people because that was how they kept track of your money. The advent of the computer allowed them to put those bank clerks to work at other jobs, though quite a few lost their jobs as well.

In the movie Hidden Figures, one of the teams of black women working for NASA used the Friden comptometer to do complex math to ten or more digits of precision. In this case, yes it WAS rocket science. Then NASA bought an IBM 7090-series machine and the "computers" (the job title of the women who did that kind of computing at the time) were going to be replaced. But a visionary women taught them how to program the 7090 and they joined the last half of the 20th century. Since this was at the time of the Mercury program, that would be late 1950s.

What's the point of this discussion? You decry AI but there are literally not enough people in the world to do by hand what is being done by machines today and the AI part is a huge contributor. From a techie standpoint, you might dislike AI, but from a business standpoint, there are not enough people in the world - qualified or otherwise - to do what needs to be done. Don't expect to escape from AI, Adam.

Restaurants use it to assure proper stock management. Hospitals use it for scheduling and supply management. Railway companies use it to optimize the order of coupling of cargo cars on a run. Long-haul trucking companies use it to pack the trucks to the optimum capacity and to compute the optimum route, taking into account current construction detours. In-car navigation often uses AI to give you optimum routes but also (where tied in to appropriate data feeds) can route you around traffic accidents and construction.

Adam, AI isn't going anywhere. And if you don't get off this kick of yours, neither are you.

Why do you think I HATE A/I? I never said that! Take a look at this post by me, which proves you dead wrong, sir! =) 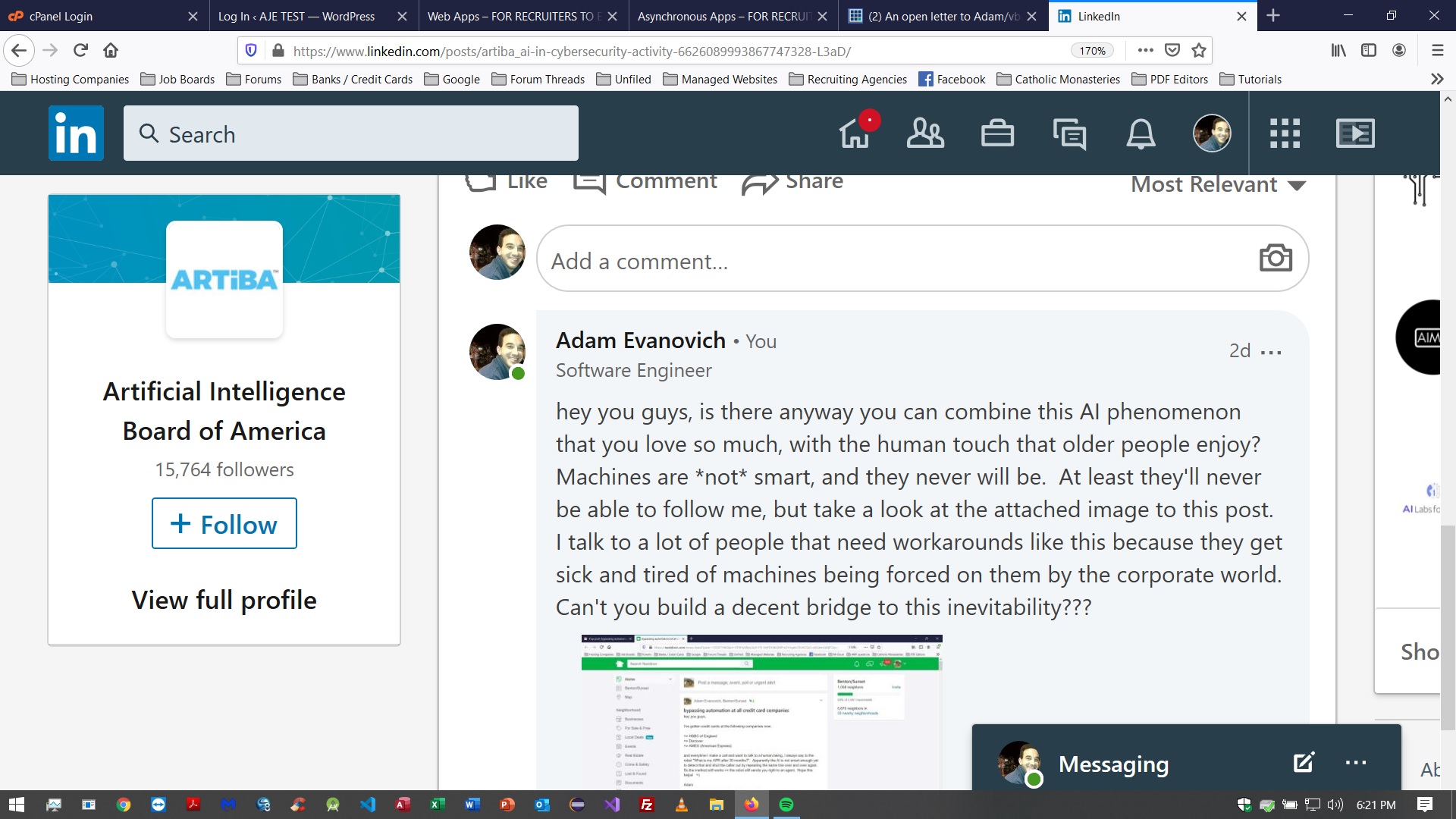 as far as me not going anywhere, I think you're way off base there too, brother. I've got friends all over the world. I'm not worried in the slightest.

What will be on your grave stone?
2

P
Is this possible without 'Root'ing my Mobile?