Very early the next morning, following the vice-Presidential debate; The Commission on Presidential Debates (unilaterally without any apparent participant consultation), changed the debate rules. Trump immediately rejected those revised rules. In response, the The Commission on Presidential Debates abruptly cancelled the debate. Commission cancels Oct. 15 presidential debate. Extremely perplexing. After all, the purpose of these debates is to give the candidates the opportunity for them to disclose to the electorate what polices they would implement if elected. Cancelling the debate is counter to the Commission's mandate.

I have no insider knowledge concerning this, but it is easy to speculate that this was done to secretly "protect" the Biden/Harris campaign.

Of further interest:
Just five days ago, I speculated that there may be some unknown reason for why the Presidential debate was cancelled for tonight. It is possible that the Biden campaign, to a degree, was aware of this story brewing. Of course, direct concrete facts of why the debate was cancelled will not be publicly available.

As has already been noted by Fox News, it will be interesting to observe if Biden, at tonight's town hall meeting, will actually be asked to comment on this breaking story.
A

Steve R. said:
It is possible that the Biden campaign, to a degree, was aware of this story brewing. Of course, direct concrete facts of why the debate was cancelled will not be publicly available.
Click to expand...

Biden is not subject to what used to be referred to as the press, social media controls the narrative. See https://www.access-programmers.co.uk/forums/threads/off-topic.304735/post-1725206

I couldn't find any mention of it on CNN. Perhaps it is there, in the small print.
A

Pretty much all descent is block from Yahoo, Google, MSN, Twitter, Facebook .....
The only commentary allowed are hand picked tweets from celebrities aligned with these platforms. FOX News still allows for commentary and this site, even here people wish it would be shut down.

Be careful what you wish for! 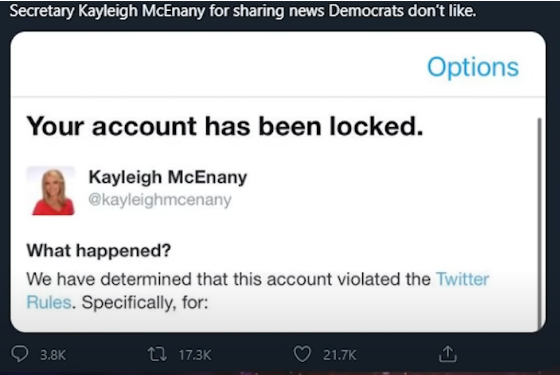 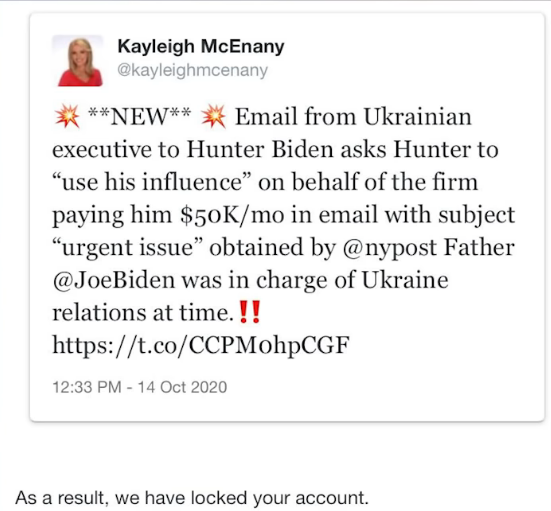 Suppression of the exchange of information is one of the most troubling things.

If a dictator violently takes over, that is clear to all, and all might resist.
But if a government faction achieves power and can claim they did so by true persuasion/agreement (but that agreement was totally based on partial information, that an informed populace wouldn't have given), that is much more insidious, and probably better founded to last longer, if not forever.

Twitter and Facebook are too big for "boycotts". Let's boycott them, holds no promise-that won't work anymore.

The government could easily come at them from antitrust / monopoly angle, but which government? If the liberals take over, this antitrust activity will never happen. And the people will continue to be fed whatever information is approved by Democrats + BigTech...which will make people continue to be fooled into thinking they are the better choice. Which gives Democrats a chance of holding power forever.

(Trump may easily have a tort cause of action against them for selectively or unfairly applying their Terms of Service, which perhaps binds the company just as much as the user. Damages requested should be whatever winning a Presidency is worth, hopefully enough to end Twitter. But this is just a possibility, and may never happen).

I don't like where this is going. I'm beginning to imagine a United States where liberals grab power, forever--because they also control the information exchanged among citizens, which then informs the vote. Dang!

Excellent presentation by Jonathan Turley. (slight delay due to ad.)

The problem is that Trump can't sue the social media companies because they are protected by law from just this type of action.

If Trump can get this done with an Executive order to immediately enforce rule 230, then, I say do it.

EVERY PERSON IN THE WORLD should be worried about the NY Post article being censored. These social media companies operate in YOUR country too and YOUR elections are next.

This is not Russia or China interfering with an American election, at the moment, this is a CIVIL war. It is Americans interfering with an American election. The rest of the world is in danger because there isn't anything civil about the dispute. The Marxists think that their view of the world is the only correct view and everyone needs to just shut up.

This is such an overt attempt to bias an election that I think something needs to happen and it has to happen now even if the remedy is only temporary.
I

Agree very much on almost everything you posted. It's a VERY, VERY troubling situation, what happened with Twitter vs. the story.
That one definitely shocked me to some degree. It's one thing to block sharing about QAnon or some highly debated COVID 'science' thing, or what have you. But a legit story from a news outlet with sources absolutely no worse than 1000 other ones in the past few years--OUCH!

I am not at all sure that social media companies are protected from a person filing a personal liability lawsuit that basically says, No, I'm not suing you for the content you hosted, I'm suing you for failing to fairly and universally apply your stated Terms of Service...and that failure to abide by your contracted TOS adversely impacted me. He surely should try, at least. Nothing to lose.

Appalling speech by Biden today in Michigan. Once again he used selective "facts" to falsely assert that Trump had not condemed supposed White racism despite the fact that Trump has done so for the past four years now. On the town hall meeting the prior night, Trump once again condemned White supremacy, a Biden refused to acknowledge it. Biden even went so far as to imply that Trump condoned the actions of those who had attempted to kidnap Whitmar.

Biden made the gratuitous generic statement that he condemned all violence, despite the fact that he condemned Trump's identical statements as grossly inadequate. To play Biden's word play game, Biden did not condem the violence and racism of Black Lives Matter. It is unfortunate that many people fail to see Biden's duplicity.
Last edited: Oct 17, 2020
P

The left works from Goebbels' playbook. If you tell a lie convincingly enough and you tell it enough times, it becomes true. This is why they need control over the media. They can't have other voices potentially contradicting their lies. This is no longer some conspiracy theory. It is real and it is here.

The Republicans are feckless and stupid for not understanding how big tech would attempt to manipulate the election. They have been warned by experts for years. I guess they just hate Trump so much that they're willing to let it happen.

I have been warning my friends for a decade. Nobody listens. It doesn't matter what side the media takes. What matters is that it is taking sides and big tech is all on board with it and that is the death knell for Democracy. No wonder our children don't have to read 1984 any more. They might question the left's current position on free speech

I'm guessing that if Trump loses this election, and the Dems keep the house and take the Senate, that there will be nowhere safe on this planet for him. They will continue the harassment with lawsuits out of vindictiveness and the Republicans won't even try to stop them. Trump was never able to excise the deep state from the DOJ, FBI, and CIA. They are all sitting back waiting to be reactivated by a new Democrat President.
A

Trump's his own worst enemy. When asked about his QAnon retweets his answer is vague "I don't know anything about QAnon," yet he somehow knows they are against pedophilia. This behavior causes headlines like this..

"You're the president — you're not like someone's crazy uncle who can just retweet whatever!"
Click to expand...

You're preaching to the choir. I send him messages every week about his stream of consciousness tweeting and talking. On the one hand, it's good to know what he's thinking but on the other, at some point we have to learn that not everything we are thinking needs to come out as words. All I can say is that he hasn't been a politician all his life so he doesn't spend hours in front of a mirror every day practicing answering questions. When you start with the top job, you don't have time to learn the basics. He's also never learned to lie with a straight face. Answering a direct question with a lie seems to be beyond him so he evades and he is not good at it. I'm pretty sure he knows more about QAnon than the rest of us do but a better answer would have been to say that he knew what everyone else knows and give a summary of that.
You must log in or register to reply here.

Turley, Confirming the Legitimacy of the Votes Cast is NOT 'Delegitimizing Democracy'

Will Biden Ever Take Genuine Hard Questions from Reporters?
2 3 4