Guilty or Not Guilty? The George Floyd trial... (1 Viewer)

Jon said:
New story ready for outrage: 15 year old black girl shot dead by police. She was trying to stab two black women at the time but BLM protesters still show up, protesting police saving another black person from being stabbed. Would they prefer the cops to just let them stab the victim? 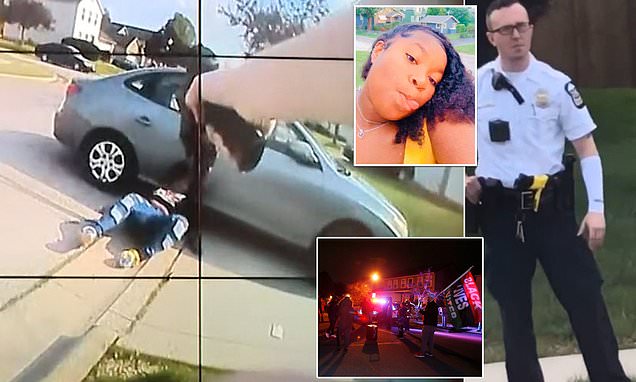 Columbus Police said that one person was killed in the officer-involved shooting that took place on the east side of Columbus, Ohio, on Tuesday afternoon. Makhia Bryant was identified as victim.

What should happen to the police officer, a medal or 10 years in prison? I can't tell anymore.
Click to expand...

RE: the motives or agenda of BLM
I'm learning (from my book Taboo, chapters 6 and 7) that many of these racial justice movements and associated politicians have had ties with Nation of Islam. I used to think NOI was just harmless nonsense. However, now I've learned about actual NOI theology and what they believe about the various races. It's so vile and sick/racist I won't go into it here at all, but you can research/google.
P

I don't think any of the 3 charges required proof of intent to kill,
Click to expand...

I don't either. The question should be - are you 100% certain that Chauvin's actions led to the death and the answer to that is NO. Floyd was a dead man walking. He was dying before he got to the station regardless of Chauvin's unwarranted actions. Chauvin was a bad cop. I never heard anyone dispute that. His actions were despicable but was he directly responsible for Floyd's death? NO.
A

Jon said:
New story ready for outrage: 15 year old black girl shot dead by police. She was trying to stab two black women at the time but BLM protesters still show up, protesting police saving another black person from being stabbed. Would they prefer the cops to just let them stab the victim?
Click to expand...

In the George Floyd saga, the prosecutor said you can trust your eyes. In this new case where the knife is in plain view will we be asked to trust our eyes? Or will be asked to look in another direction?

Almost every encounter with police involves someone behaving badly prior to their arrival. Some people have a lifetime of bad decisions prior to being killed. The media and the community take some of these bad actors and make them into something more than they really are.
H

If the cop didn't shoot and the woman stabbed the other woman in the neck and she died, the cops would be blamed for not intervening. They can't win. They are now just the punchbags to blame for everything. I predict surges in violence, riots, mob rule, demoralised police, policy changes which result in even more violence. Look what happened when they defunded the police in Minneapolis. Crime and murder goes up.
I

Jon said:
I predict surges in violence, riots, mob rule, demoralised police, policy changes which result in even more violence. Look what happened when they defunded the police in Minneapolis. Crime and murder goes up.
Click to expand...

Empirical data gathered and analyzed by Mr. Reilly shows, from what I have seen, that your prediction pretty much has 100% chance of becoming true. Reactive policing and trigger hesitancy due to these movements have resulted in huge crime waves in the past.

Of course, illegitimacy and fatherless rates are the best actual predictors of crime (in all race categories), but our society is pretty much "over" that. When a US Senator produced a well researched report warning of the correlation between illegitimacy rates, pay-per-child welfare, and crime a decade ago, he was roundly savaged by the left and that was pretty much the last major effort for a common sense, empirically based response to the problem. Our society is now embracing many things that have become the antithesis to the nuclear, traditional 2-parent family household with children born of a marriage between two ordinary people.........which, when it was strong, produced some of the lowest crime rates we know of.

This is why any movement whose teachings or legislation undermine the ability to choose to raise a family with children encouraged and taught and prepared to live a life that conforms to some of these 'basics', I take very seriously.

Just saw this chap, exactly what I thought!

As a follow-up to Tatum's comment that Biden is broadcasting the racism card to mischaractorize the Chauvin trail as having a racist overtone.

The tide is Turning!​

Glad to be here (and get help/ideas)